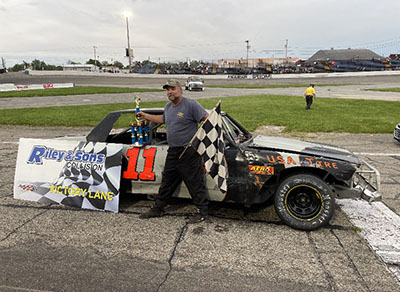 When the handle went away on his son’s ThunderCar in the waning laps, Jimmy Kirby found his way to the win. James Kirby III was looking for his third consecutive feature win in Noble Wine & Spirit ThunderCar action Saturday and appeared to be well on his way to victory. Jimmy Kirby led the first lap and was passed by his son on the second circuit with Ronnie Rose briefly moving into the third spot. Rose would retire on lap 12 which left the battle between father and son. James Kirby opened up a comfortable lead but in the closing laps he was trying to lap the car of Caleb Southerland, but his car was loose in the corners. That allowed Jimmy Kirby to close the gap and on the final lap got underneath his son and beat him to the checkered flag by .007-seconds. Ricky Craig came home in third followed by Southerland and Dennis Hayes.

James Kirby was looking for his second feature win of the Spring Championship’s presented by Byrider after winning the McGunegill Engine Performance Late Model race. Kirby only learned he was going to compete in the Late Model event late in the afternoon when the regular driver couldn’t compete. Kirby set fast time during qualifications and led all 40 laps for the victory. Early in the race Kirby was chased by Nathan Greene and Jim Crabtree Jr. On a lap six restart, Kirby got on the apron entering turn one and shot up the track causing Greene to make contact with the outside retaining wall. That moved Jim Crabtree up to second but on the restart it was J.P. Crabtree moving into the second spot. Kirby won by .386-seconds over J.P. Crabtree with Jim Crabtree, Logan Huckeba and Jared Soards rounding out the top five.