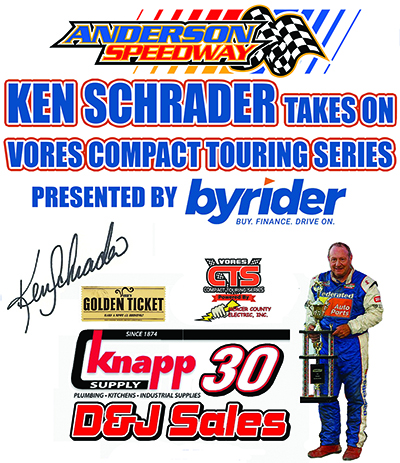 If a vehicle has four wheels and a motor former NASCAR star Kenny Schrader is going to race it. Over the years Schrader has competed at Anderson Speedway in an ARCA stock car, modified and has made four starts in the Pay Less Little 500. This Saturday Schrader will be competing in the Vore’s Compact Touring Series event at the high banked quarter-mile oval. Traditionally the Vore’s Compact Touring Series brings more than 30 cars to compete at Anderson Speedway and this weekend should see plenty of competitors on hand. Schrader, in the 1980’s won USAC Silver Crown and Sprint Car championships, has recorded four NASCAR Cup wins and has won 18 times with ARCA.

The racing card includes the McGunegill Engine Performance Late Models where Jeff Marcum will be looking for a third win this season and two in a row. Throughout the year Marcum has battled with Ronnie Rose for feature win honors. The Vore’s Welding and Steel Street Stocks return where Elwood’s Jacob McElfresh visited the Star Financial Winner’s Circle for the first time since 2017. McElfresh was pressed for the lead most of the race by defending track champion Josh Poore, who is still looking for that first victory of 2020. The Thunder Roadsters round out the racing program where Chad Cory picked up his second feature victory of the year holding off Jason Powers and Doug Dugger. Qualifications are set for 6 p.m. with racing action at 7:30 p.m. Adult tickets are $12, Kids (6-12) $5, ages 5 and under are free.