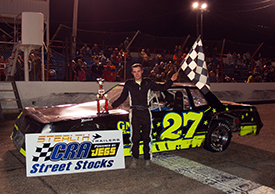 Anderson’s Josh Poore used the high line to pass Jason Atkinson with 38 laps remaining to capture the CRA Stealth Trailers Street Stocks feature at Anderson Speedway.Poore set fast time during qualifications and started tenth in the 75-lap feature on Saturday, working his way steadily to the front after starting tenth in the field as a result of the inversion.Poore was running third on lap 35 when he moved to the outside line to first pass Jimmy Kirby on lap 36 and then made an identical move to pass Atkinson entering turn three a lap later.Following Poore to the checkers were Dustin Burge, Atkinson, J.J. Schafer and Jimmy Kirby.Although Atkinson was in the lead to that point he was being pressed by Jimmy Kirby, Poore, Dustin Burge and Brandon Mefford.After taking the lead Poore had to survive a number of restarts which started on lap 48 when defending CRA and Anderson Speedway champion Burge, who was running fourth when he spun coming off the second corner.Before another lap could be completed three cars tangled on the front straight and on lap 49 Mefford made contact with Atkinson, cutting down a tire and hitting the turn one wall.The final caution flag waved on lap 71 which gave Atkinson one final chance to pass Poore, but he wasn’t able to contend for the win.The early lead was taken by James Kirby III who got loose going down the back straight on lap ten which allowed Atkinson to take the top spot with an outside pass.The race was slowed by 11 caution flags with only 12 of the 21 cars still running at the finish.During qualifications Poore set a new track record with a time of 13.738-seconds, breaking the mark he set on April 9, 2011 at 13.746-seconds.Poore was coming off a victory in a 200-lap CRA event in Ohio and won the Street Stock division season opening race at Anderson Speedway.