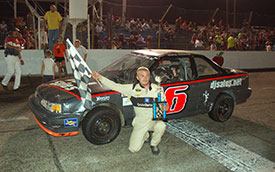 Anderson Speedway added the new division to the schedule for nine appearances in 2014. The Pro Compacts have a little more horsepower and use a different tire than the Front Wheel Divison.

Nick Warner took the early lead starting on the outside of the front row thanks to the inversion of the six-fast qualifiers. He was chased by Ron Phipps, Andy Jennings, Chris Jennings and Nick Pollitt.

Jennings passed his brother, Andy, on a restart on lap two and then worked his way inside of Phipps coming off the third turn.

At the finish it was Chris Jennings winning by 4.3-seconds followed by Warner, Andy Jennings, Phipps and Pollitt.

Warner led all ten laps to record the victory in the first ever race of the Pro Compact Division in the opening heat race.

But it wasn’t an easy victory. Warner and Randy Hoppes swapped the lead times in the first six laps.

Chris Jennings was able to use the high line to pass Hoppes for second on lap eighth coming off the second corner. Pollitt was fourth with Phipps rounding out the top five.

Jonathon Pitts was able to get inside of Jesse Thomas on the fifth lap entering turn three to take the lead and record the victory.