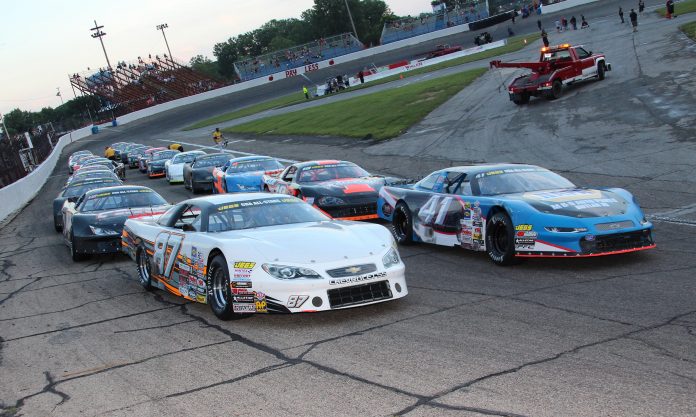 Salem, IN (June 9, 2020) – The JEGS/CRA All-Stars Tour Presented by Chevrolet Performance will return to action this Saturday in the AERCO Heating and Cooling 100 Presented by JEGS.com at Anderson Speedway located in Anderson, Indiana. The JEGS/CRA All-Stars Tour competed at Anderson Speedway from 2011 through the 2016 season, before returning last season. Trent Snyder is a three-time series winner at Anderson, from 2011 through 2013. Florida native Steve Dorer won in 2014, while Indianapolis veteran racer Eddie Van Meter won in 2015. Two-time series Champion Cody Coughlin won Anderson Speedway in 2016 on his way to claiming his second series Championship. ARCA/CRA Super Series regular competitor Hunter Jack picked up the victory in last year’s series event at Anderson, it was his first ever series win.

Saturday’s event will only be the series second event of the season after the COVID-19 pandemic caused several series events to be postponed or cancelled. Georgia ace Bubba Pollard picked up the win in the series season opener at Lebanon I-44 Speedway on May 30th after a tough battle with former series winner and former Track Champion Cole Williams.

Former series Rookie of the Year and a four-time winner with the series Carson Hocevar is entered. Hocevar picked up his first ARCA/CRA Super Series win at Lebanon I-44 Speedway on May 30th after coming from 11th with 18 laps to go, to pass for the win coming to checkers.

Other top series drivers entered include two time series Champion Dan Leeck, last year’s runner up in the series Chase for the Championship Mandy Chick, Trever McCoy who has been in the series Chase for the Championship in 2018 and 2019, 2019 JEGS/CRA All-Stars Tour Rookie of the Year Jaden Cretacci, former series winners Brandon Oakley and Mason Keller, along with Evan Shotko, James Krueger, Jimmy Tucker, Brandon Varney, James Kirby, Cassten Everidge and J.P. Crabtree.

There is an open practice on Friday, June 12th, pits open at 4pm, open practice will go from 5 to 8pm. Pits open on Saturday at 1:30 pm. Practice will begin at 4pm. Jerico Performance Products Qualifying will begin at 6:30pm. Racing action will begin at 8pm and will include the AERCO Heating and Cooling 100 Presented by JEGS.com for JEGS/CRA All-Stars Tour. Also racing that night will be the Victory Custom Trailers CRA Junior Late Models in their 2020 season debut, the Vores Compact Touring Series and Kenyon Midgets in a huge night of racing action that will be the first night fans are allowed to come watch in 2020.

More track and event info can be found at www.andersonspeedway.com.

More information on the JEGS/CRA All-Stars Tour Presented by Chevrolet Performance is available at www.cra-racing.com.