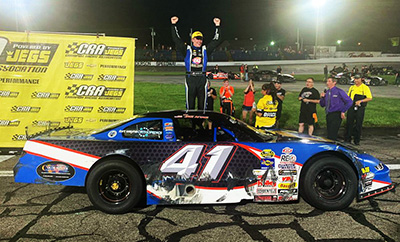 For the final 80 laps and five restarts Hunter Jack was able to hold off Steve Dorer for the victory in the Sport Clips 100 for the JEGS/CRA All-Stars Tour. The Saturday night event marked the return of the Pro Late Model Series to Anderson Speedway after a two-year absence and it brought Jack his first career win with the series.

Jack led twice for a total of 74 laps taking the point for the final time on lap 55 with an inside pass on Dorer on a restart. Dorer had taken the lead on a previous restart but was unable to maintain the advantage. For the next 45 laps Dorer stayed glued to Jack’s rear bumper with fast qualifier Cody Coughlin waiting for a mistake by one of the front runners. Jack won by 1.7-seconds at the finish after being able to pull away from Dorer over the final ten circuits. Coughlin came home third.

Jack took the lead at the start following the inversion following qualifying and led the first 28 laps. The driver on the move early was Sammy Smith who took the lead on lap 29 after starting third in the field. Smith led until lap 53 when he tangled with the lapped car of Tanner Jack in turn two. He spun a second time a lap later after contact with Jaden Cretacci. The race was red-flagged on lap 56 when Brandon Oakley got loose on the front straight while running fourth and slid up turn one where he was collected by Mandy Chick.

Robbie Wyman took advantage of a lapped car to take the lead in the PGG Thunder Car feature to pass early leader Ron Phipps. Wyman opened up a comfortable lead after a restart on lap 19 but two-time winner in 2019, Dustin Sapp made a late race charge to challenge for the victory. At the checkered flag Wyman won by .79-seconds after Sapp slipped in turn two on the final lap. Dylan Hoppes finished third.