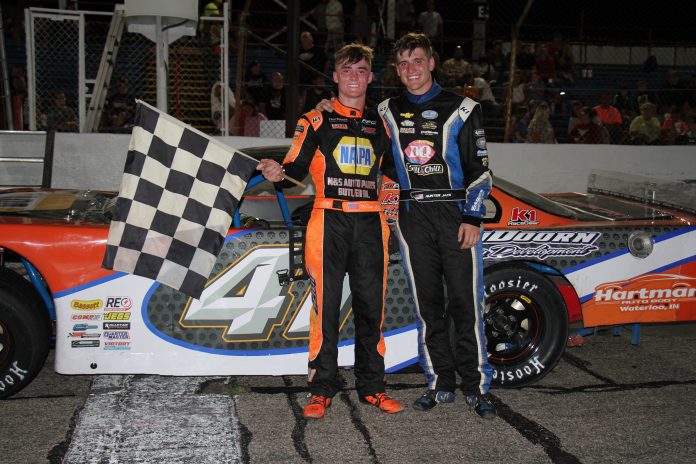 Through most of the second half of the race Saturday Tanner Jack was in a battle with his older brother Hunter for the victory.

Tanner Jack took the lead for the first time on lap 40 with an outside pass of James Kirby III on a restart and his brother moved into the second spot nine laps later with an inside pass in turn one.

The two brothers from Auburn raced nose to tail for the final 51 laps with Hunter Jack taking the point on lap 75 with an outside pass of his brother on a restart.

The older brother started to open a gap with former Speedway champion Jeff Marcum moving into the third spot on lap 63.

The fifth and final caution flag waved when Marcum spun in turn four after contact with Kirby setting up a 10-lap shoot-out.

Hunter Jack opted to restart on the outside line giving Tanner the preferred inside lane.

Tanner took the lead going into turn one and was able to hold off his brother by two-tenths of a second for the victory. Danny Adams, Marcum and Brian Janes rounded out the top five.

Shawn Cullen and Robbie Wyman swabbed the lead four times in the Thunder Car Norrick Petroleum 100 with Cullen emerging as the victor.

The lead was traded all four times following a restart.

Cullen took the lead for the first time on the second circuit from Jameson Owens and remained in front until lap 31.

On the restart Wyman used the outside line to grab the point but yielded it back to Cullen on lap 56.

Wyman took the lead for a second time following a restart on lap 62 again using the high groove to pass Cullen but this time Cullen was made out front on lap 66.

The sixth caution flag waved on lap 89 when three cars got together coming off the second corner.

On the final restart Cullen was able to maintain the lead winning by 1.3-seconds over Wyman with Owens, Ron Phipps and David McConnell rounding out the top five.

In other racing: Mike McKinnon passed Elliott McKinney on the final lap to win his third Marcum’s Welding Front Wheel Driver feature of the year.

McKinnon had to come from the back of the field for the victory after being involved in a three-car tangle on the seventh of 20 circuits.

His charge to the front was helped by two separate caution periods with five laps remaining which allowed him to close on McKinney and Ronnie Constant.