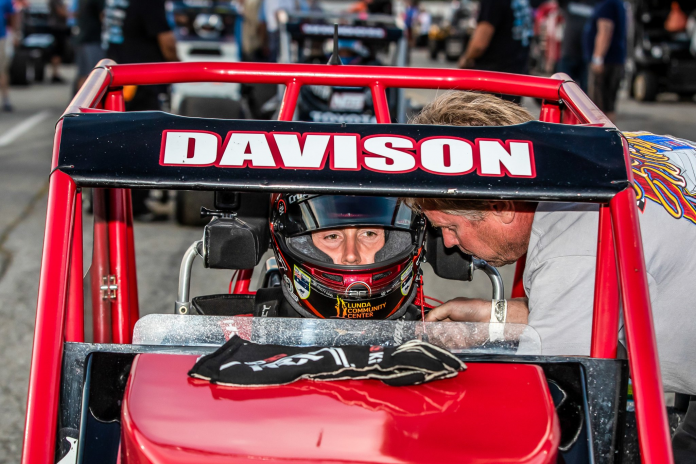 Davison has driven in many different disciplines all over the globe the past year and a half. He has made two NASCAR Cup Series Starts at Pocono International two weeks ago for Spire Racing. He competed in the Chili Bowl racing Midgets in January and made two USAC Silver Crown starts last year at Salem Speedway and Lucas Oil Raceway.  In addition to all of that, he made his 5th start in the Indy 500 for Dale Coyne Racing with Byrd/Hollinger/Belardi, where he finished in the 12th position.

“James is a very versatile driver,” explained Davey Hamilton. “He has driven everything from Indy Cars, Sports Cars, NASCAR, and even the chili bowl. James drove two silver crown races for me last year and was very smart.”

Many of the same drivers Davison competed against in the USAC Silver Crown ranks will be racing a non-wing sprint car on Saturday. Those drivers include three time Little 500 winner Kody Swanson, longtime pavement racer Bobby Santos III and Angola, Indiana’s Derek Bischak.

“He is a very smart driver,” continued Hamilton. “He understands he has a lot to learn and is up against very good competition. Every time he races, he wants to learn the craft.”

Davison will pilot an entry for Hamilton Racing with Byrd and Petry Racing.  It will carry support from America’s Best Value Inn and Tilson. Hamilton Racing brings much experience to Anderson Speedway. The same team set on the pole of the 2018 Little 500 with Davey Hamilton Jr. as the driver.

Pit Gates will open at 3:30pm Saturday, July 11. Teams will get two rounds of practice starting at 5:00pm then followed by single car qualifying at 6:30pm. Racing is set to begin at 8:00pm.

Non-Wing Sprints will be joined by the Day Transportation Mel Kenyon Midgets, competing in the 75 Lap Don and Mel Kenyon Classic. Also racing are the McGunegill Engine Late Models and Thunder Roadsters.

Tickets will be available for the race at the admission gate only. Adult Tickets are $15, Kids (6-12) $5, Ages 5 and under Free. Saturday’s race can also be viewed on SpeedshiftTV.com.