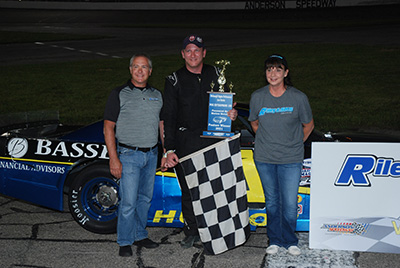 Fort Wayne driver Billy Hutson accomplished a goal he’s been striving for since 2006 at Anderson Speedway. Over the past few years Hutson has set fast time during qualifications for the McGunegill Engine Performance Late Models, but victory always eluded him. Hutson, on Saturday, passed early leader Jimmy Kirby III on lap 48 to win for the first time on the high banked quarter-mile oval in the PGG 100.

Kirby started on the front row following the invert with Buddy Davis.  He took the lead at the start with Davis, Ronnie Rose, Jeff Marcum and Hutson running in a tight pack. The car on the move was J.P. Crabtree who started on the tail of the field and by the 11th circuit had passed both Hutson and Marcum by using the high line. As Crabtree started to pass Rose on the outside down the back straight on lap 15, the two cars made contact with the outside retaining wall. Both drivers were uninjured but their cars suffered significant damage.

On the restart both Hutson and Marcum got around Davis and set their sights on Kirby. For the next 33 circuits Hutson put pressure on Kirby trying to make the inside pass, a move he accomplished on lap 48 on the front straight. Marcum moved into the second spot one lap later. Marcum ran in Hutson’s tire tracks for the next 39 circuits when the caution flag waved on lap 88 for a spin by John Stapleton. Hutson was able to maintain the lead on the restart winning by 1.2 seconds over Marcum with Kirby coming home in third.

Another Fort Wayne driver Terry Fisher Jr. survived a race of attrition to win the Hoosier 50 in the first appearance of the Midwest Modified Tour at Anderson Speedway. Fisher and Jeff Lane started on the front row following the eight-car inversion with Fisher jumping into the lead. Lane, Mark Dimit, Chad Poorman and Brian Nester all ran in a tight line. Lane retired after 15 laps and on lap 31 the caution flag waved initially for Damon Breedlove making contact with the back straight returning wall. Three more caution flags would wave before another lap could be completed. Dimit on several of the restarts challenged Fisher for the lead with Ryan Amonett, Nester, fast qualifier Kyle Purvis and Jeremy Jackson in contention for the win. Dimit passed Fisher on lap 35 with an inside move on the back straight and was opening a gap when his ride went up in a plume of smoke. Fisher scored the win followed by Nester and Amonett.