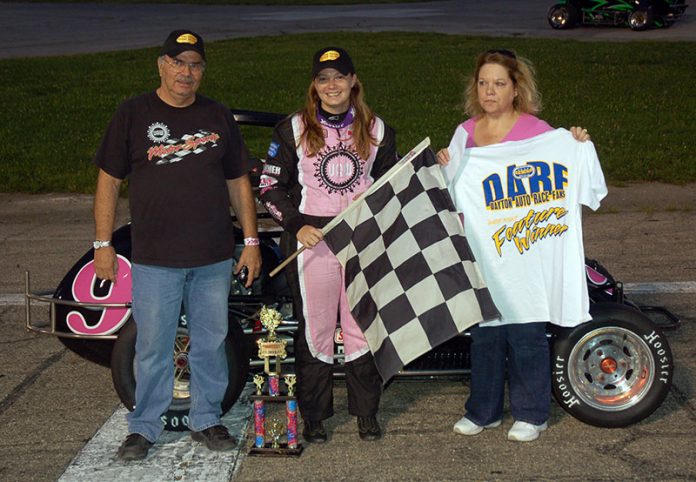 Logan Huggler dominated the Mel Kenyon Midget Series to record his first career feature win. It was a good night for Huggler who also recorded his first ever heat win.

While Huggler was pulling away from the field, there was a five -car battle for the second spot.

Travis Young held on to the second spot by holding off Amanda Davies, Jessica Bean, and Clayton Gaines.

Fast qualifier Dameron Taylor was making a run from the sixth starting spot when he made contact with Bean’s car, lifting the front-end off the pavement.

Gaines and Cole Fehr swapped the fifth position several times late in the race before Gaines took control on lap 29.

In the first of two heat races, Amanda Davies was able to make an inside pass of veteran Travis Young on lap seven coming off the fourth corner to take the point for the first time in her career.

Bean got inside of Young a lap later exiting the second corner and started to close on Davies.

Davies won by three-tenths of a second over Bean and Young.

Gaines led the first seven laps of the second heat race before being passed by Logan Huggler with an inside move entering turn three. When Gaines slipped on lap nine it allowed Ryan Huggler and Cole Fehr to gain the final two podium positions.

Jessica Bean led all 40 laps to capture her second Mel Kenyon Midget Series victory of the year in the rained out race from Aug. 23.

Bean started on the pole position and was chased the entire distance by rookie Colton Dooley and Cameron Taylor.

Amanda Davies brought out the first caution flag on lap 15 when she spun in turn four while battling for the sixth position. Before another green flag lap could be turned Ryan Huggler bounced off the front straight wall on the restart.

Once the race resumed Beam drove away to win by 4.5-seconds over Dooley, Taylor, Logan Huggler and Travis Young.

Earlier in the year Bean was on her way to an apparent victory when she spun late in the race giving the win to Young.

Bean again had some close calls with lapped traffic late in the feature.

“It’s great to be back in the winner’s circle,” Bean said. “I did have to deal with some lapped traffic.”