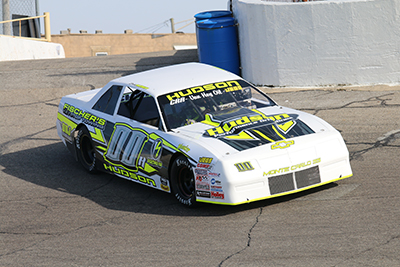 Hudson posted the second quickest time Saturday for the third of the Four Crown events and started seventh in the field as a result of the inversion. He worked his way up to the second spot before race leader Jason Atkinson on lap 86 by making an inside pass of Jacob McElfresh. Hudson settled for the second spot at the halfway break, but took the lead from Atkinson on the 108th circuit with an inside move entering turn three. Hudson started to pull away from the rest of the field while Atkinson, fast qualifier Chuck Barnes Jr., James Kirby III and McElfresh fought for the second position.

The third caution flag waved on lap 182 when Cory Adams and Dallas Frueh spun on the front straight, bunching up the lead lap cars. Hudson was able to maintain the lead over Atkinson on the restart but the race was red-flagged on lap 197 when McElfresh’s car erupted in flames while the Elwood driver was running fifth. That set up a three lap shoot-out but the initial restart was aborted when Atkinson spun on the front straight. For the final three laps Kirby running the outside groove was looking to steal the win away from Hudson. But his car slipped coming off the fourth corner on the final lap denying him the victory.

Hudson won by .156-seconds over Kirby followed by Atkinson, Josh Poore and Barnes. Atkinson, who led from lap 52 to 107, was less than pleased with the third place finish. Andrew Teepe led the first 39 laps before Kirby led for one circuit and Teepe went back out front until he surrendered the point to Atkinson.

Alexandria driver Kent Baledge set fast time, won the heat and then dominated in the feature to score the victory in the first visit of the Pro National Baby Grands to Anderson Speedway in several years. Michael Phipps recorded his third feature win of the season in Hart’s Figure 8 competition.