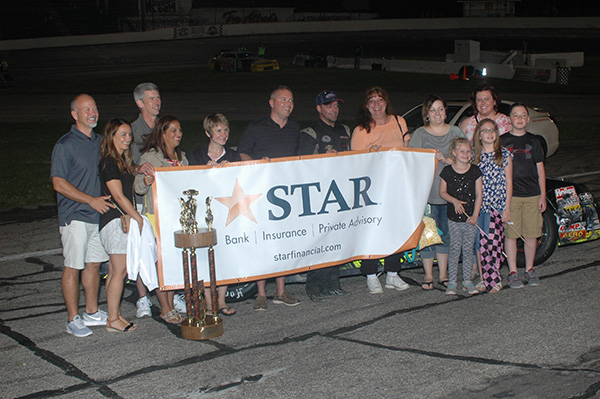 To the delight of the fans there was tight racing among nine different drivers for the top spot with the race going the final 100 laps without a caution flag.

Hudson started tenth in the field and didn’t crack the top five until lap 50, but once there he stayed in the hunt for the win.

At the halfway break Ryan Amonett was the leader chased by Brian Hopkins and Hudson after early leaders Lane and Chuck Barnes Jr. both hit the outside retaining wall on lap 93 when Jordan Hahn lost an engine entering turn two. Both Barnes and Lane were able to continue.

Hudson moved into the second spot on lap 152 when he was able to make an outside pass of Hopkins entering turn three aided by slower cars.

With the three leaders running nose to tail fast qualifier Josh Poore joined the fray and Barnes was charging through the field after starting tenth after the break.

Hudson and Hopkins got inside of Amonett on lap 167 when the New Castle drifted high in turn one and Amonett’s night would end on lap 171 with a mechanical problem.

For the final 33 laps Hopkins was glued to Hudson’s rear bumper. When the two leaders encountered slower traffic with less than 20 circuits remaining it looked like Hopkins would find a way around Hudson, but his efforts came up short.

Barnes completed his strong second half run by passing Poore on lap 192 with a pass on the front straight.

Following Hudson, Hopkins and Barnes to the checkered flag were Poore and Andrew Teepe.

Robbins led all 25 laps of the rescheduled May 26 feature that was rained out with Marty Griffin and Dave Osborn rounding out the top three.

In the second feature the early lead was taken by Mark Dietzen with Robbins starting sixth in the field after setting fast time during qualifications.

On the third lap Robbins got inside of third place running Griffin, a lap later he got inside of Darrell Lee Brown for second with an inside pass entering turn three.

Robbins passed Dietzen on the sixth circuit in turn one and drove to the victory. Griffin finished second followed by Osborn, Chad Cory and Dietzen.

Ron Phipps held off Nick Warner early in the feature to win for the fourth consecutive time in 2017.

Warner and Phipps swapped the lead in the beginning stages of the race, but on lap eight Warner got loose coming off the second corner and collected the car of Bill Doggett. Both Warner and Doggett continued after changing a flat tire.

With 11 laps remaining Warner moved into the second spot and was closing on Phipps at the finish, but had to settle for a runner-up finish.