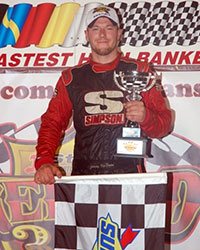 After getting everything squared away inside the new VanDoorn Racing Development building, Johnny VanDoorn and his brother, Butch VanDoorn have been hard at work ever since in their new 6.500 square foot race shop. The Brothers VanDoorn have been working non-stop building brand new racecars from the VDRD shops including VanDoorn’s own prototype template Super Late Model. The time has now come for Johnny VanDoorn, the three-time ARCA/CRA Super Series Champion to finally climb into one of his own creations. The Coopersville, Michigan standout will make his ARCA/CRA Super Series debut in Round I of the $100,000 JEGS Triple Crown Series on Friday-Saturday, June 13-14th at the fast 1/4 (0.250) mile high-banked paved oval of Anderson Speedway in Anderson, Indiana. The Stoops Freightliner Redbud 300 will see the defending race winner not only bring out a brand new #71 VanDoorn Racing Development / Ford, but he will also seek a little redemption for just missing out on the $100,00 bonus in 2013 after winning the mini-series’ races at Anderson and Berlin Raceway (MI) a year ago. “This is a big moment in our careers for Butch and I to be able to bring our own car out to the track and finally see all of the hard work we’ve put into this program start to pay off,” The 26-year-old stated as he and his Crew Chief and younger brother make final preparations on the new machine. “We’re really excited to head to Anderson with our own stuff and really excited that Anderson is the first race. Especially since it’s the first JEGS Triple Crown Series race. Anderson is a track that we’ve been very successful at over the years.” He added. VanDoorn scored wins in the first two $100,000 JEGS Triple Crown Series races in 2013 which came at Berlin Raceway in the Inaugural Battle at Berlin 251 on June 15th, 2013 and then at Anderson in last season’s Redbud 300 on July 20th, 2013. The bid for the $100,000 bonus for winning all three Triple Crown Series events came up just short in the 42nd Running of the Winchester 400 at Winchester Speedway (IN) on October 13th, 2013 with an eighth place finish after rear end issues plagued him late in the race. This time around, VanDoorn is concentrating solely on the three race series. He did pick up a $10,000 bonus for winning two of the three races, but that’s not the goal for VanDoorn this time around as he wants the clean sweep of all three events and the Redbud 300 begins that quest. “We were so close last year to winning the big bonus. This time that’s our main focus. We’re as ready as we’re going to be, we’re in our own stuff we’ve built from the ground up. We have no excuses now.” He ended. The three-time ARCA/CRA Super Series Champion (2012, 2010 & 2009) is already amongst the all-time leaders in most statistical categories in the series. He has 17 career wins, good for fourth all-time and just one back of third on the list behind Canadian legend, Junior Hanley. He is six starts away from 100 career events with 94, good for 12th all-time as he has racked up an impressive 44 top five finishes, sixth all-time, as well as 69 top 10s, seventh all-time. VanDoorn also has an impressive 13 Fast Qualifier Awards, third on the all-time list, just two out of second and five away from the all-time lead in that category. In addition, he is second all-time in career laps led with a whopping 2,182 behind only fellow three-time series champion, Scott Hantz. Finally he’s ninth all-time in career laps ran with an astounding 13,449 laps turned. For the Redbud 300, VanDoorn’s #71 VanDoorn Racing Development Super Late Model, which features a number change dating back to his quarter midget days, will have a Ford Fusion body with power under the hood from McGunegill Engine Performance. He’ll have sponsorship decals and support from T.J. Racing Lubricants as well as VanDoorn Shocks & Suspension and M.P.H Promotions.