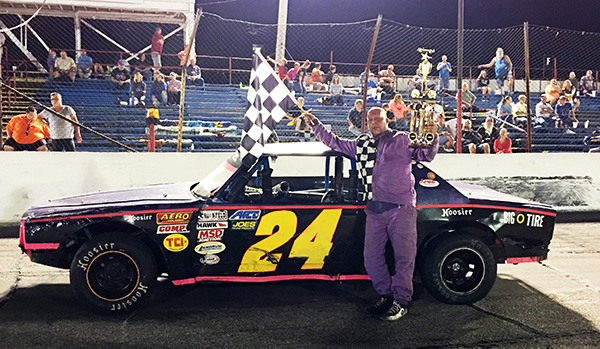 Markleville driver Randy Hoppes was the first to admit that his win in the Thunder Car feature at Anderson Speedway was a lucky victory on Saturday.
Before Hoppes would inherit the lead on lap 21 the race saw three of the front-running contenders eliminated by incidents on the high banked quarter-mile oval.
The early lead was grabbed by Brandon Burkhart chased by point leader Earl Adams and fast qualifier Ronnie Rose. The first caution flag waved on lap eight when Tyler DeHart stopped on the back straight.
On the restart Adams grabbed the lead from Burkhart who was battling with Rose for the second spot. On the ninth circuit Burkhart and Rose tangled entering turn four with the end result being both drivers finished for the night.
Adams opened up a comfortable lead over Hoppes and Brad Cain when the victory was snatched from Adams grasp. He tangled with the lapped car of Jared Keller in turn four ending the night for both competitors.
Hoppes inherited the lead followed by Muncie’s Kevin Rabenstein, Cain and Jeremy Threet. Hoppes drove to the victory, his second of the season followed by Rabenstein, Cain, Austin Russell and Threet, who spun on the final lap in turn two.
The outcome of the Saturday races had an impact on the season point championship. Adams came into the night with a one-point lead over Cain and 12 points over Threet. With Cain’s third place finish combined with Adams seventh place showing there was a change in point leader.
Street Stocks
Anderson’s Josh Poore rebuilt his Street Stock following an incident in the Norrick Petroleum 100 in July to record his fourth win of the season.
Elwood’s Jacob McElfresh, the winner of the 100-lap feature, took the lead at the start with visiting Ohio driver Josh Sage running second followed by Andrew Cook and Poore.
Poore used the high groove to pass both Cook and Sage by the fifth lap and closed on the rear bumper of McElfresh’s car.
For the next eight laps Poore looked high and low for a way around McElfresh. Finally on lap 13 Poore gave McElfresh a bump and run move exiting the second corner and took the lead entering turn three.
Poore went on to claim the victory followed by McElfresh, Sage, Cook and Joe Pulley.
Marcum Welding Front Wheel Drive
Point leader Ron Phipps was awarded his sixth feature win of the season when the car of winning driver Kevin Harmon failed to pass technical inspection.
Harmon used the outside line on the final lap to beat Phipps to the checkered flag by inches for what would have been his first win of the season.
Phipps has led the entire race until Harmon appeared to make the winning move on the final lap.
Rickie Tharp finished second followed by Shane Reed, Jerry Loy and Harmon.
VROA Modifieds
Jason Burrus recorded his first career win in Modified action holding off Tom Boorsma on two late race restarts to secure the victory.
Loren Peterson III led the first 14 laps before being passed by Boorsma with an outside move entering turn three. Burrus moved around Peterson on the next lap in turn one.
With Boorsma opening a slight lead he spun on lap 21 on the front straight after making contact with the car of Jeff Barsen.
With Burrus in the lead Boorsma charged back to the second spot by lap 26 when the first of two late caution flags waved.
Burrus was able to hold off Boorsma for the victory followed by Peterson, Brian Beukema and Barsen.