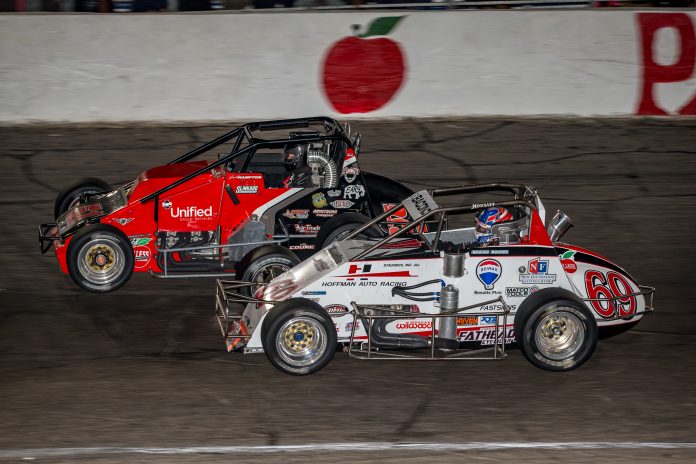 Hoffman Auto Racing and Crew Chief/Owner Rob Hoffman have returned to Anderson Speedway for the 74th Annual Lucas Oil Little 500 Presented by UAW. Brady Bacon will return as the driver for the family owned team in what will be a completely new chassis from last year. The winningest team in USAC National Sprint Car Racing history will be competing in their 7th Little 500, and their second consecutive with Brady Bacon at the wheel.

After a brief retirement from full-time crew chiefing in 2017, Rob Hoffman returned to racing last year for the sole purpose of winning the Little 500. Hoffman is not your typical Team Owner as he builds the team’s cars from top to bottom himself.

“I really like the engineering aspect of it,” Hoffman said. “I like to create something a little bit different that nobody else has. I’m hoping that it’s a little bit better than what other people have, but right now we aren’t really sure…I’m not sure we will be able to go for pole this year, but we will be right there in race trim.”

After starting 20th and finishing in the top ten in last year’s race, Hoffman Auto Racing will once again turn to Brady Bacon to pilot their Little 500 entry. Bacon was the Little 500 Rookie of the Race rookie at last year’s prestigious event. He will look to improve on his ninth place finish as the team has begun testing on their newly built chassis.

“I’ve had a lot of fun racing with Brady,” Hoffman said about his driver. “There have been a lot of drivers that I’ve had a ton of fun with over the years, but Brady is so laid back and easy to get along with. Having someone like that in your corner who is there to help is wonderful. It’s wonderful that he is willing to do that for me, and I would just about do anything for him.”

Hoffman Auto Racing has been a household name in sprint car racing for nearly 100 years. Competing in their 92nd year, they are the longest continually operated family owned race team in American history. “Coming up on a hundred years, I am willing to carry this team across the finish line,” Hoffman stated. “We will still be running cars through at least 2029 to reach that 100 year mark.”

The team has over 125 USAC Sanctioned National wins, 13 National Championships, and qualified for the Indy 500 seven times between 1973-1984. Championship drivers like Jeff Gordon, Kyle Larson, Tony Stewart, and Jerry Coons Jr. have all raced for the family during their storied careers. Daytona 500 winner, Ryan Newman, and three-time Indy 500 pole sitter, Ed Carpenter, have also driven for the family. Winning the Lucas Oil Little 500 Presented by UAW is another accomplishment the family plans to check off their racing bucket list.