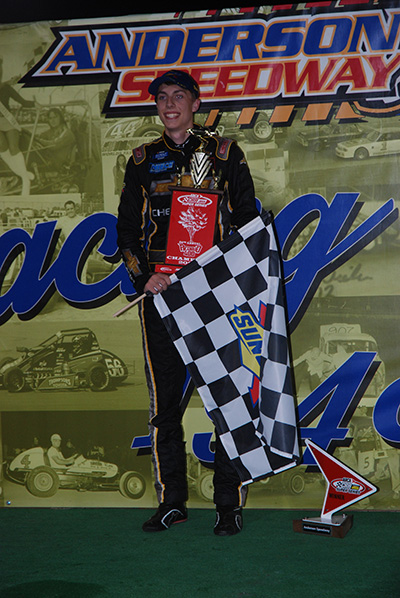 Same car, different driver, the same result as Carson Hocevar put the familiar VanDoorn racing colors into victory lane of the Redbud 400. A year ago it was Johnny VanDoorn driving to victory at Anderson Speedway. Hocevar survived a battle for the first 200 laps with Casey Johnson before taking control of the 54th running of the super late model classic on Monday.

It was the fourth Redbud 400 victory for VanDoorn Racing. With Hocevar pulling away from the best battle on the race track, a three car battle for second between Josh Brock, Casey Johnson and Sammy Smith. Brock grabbed the second spot from Johnson also on lap 225 but was unable to close on Hocevar. After Hocevar built up a 6-second lead the caution flag waved on lap 344 for a spin by Dalton Armstrong. On the restart Hocevar again pulled away from the field.

Wisconsin driver Johnson set fast time during qualifications and decided to start on the outside of the front row. From that spot he maintained the lead through several restarts while being challenged by Carson Hocevar and Stephen Nasse. Hocevar, who was constantly looking to make an inside move on Johnson, was finally able to make the pass for the point on lap 121 coming off the second turn. He started to pull away from the field when the caution flag waved on lap 150 for an incident involving Eddie VanMeter and Rick Turner. Johnson reclaimed the lead on lap 178 with an inside pass entering turn one on a restart. Hocevar led the final 175 laps in winning by .535-seconds over a closing Josh Brock with Sammy Smith, Johnson and Jack Dossey III rounding out the top five.