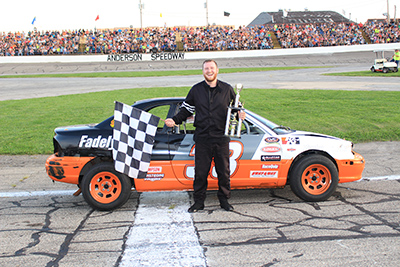 The Night of Thrills at Anderson Speedway more than lived up to its billing with a thrilling finish in the Marcum’s Welding Front Wheel Drive feature and mayhem during the popular Trailer Race.
The grandstands on Saturday were packed almost to capacity for the Herald Bulletin sponsored Night of Thrills which saw first time Anderson competitor Eli Haynes go home with the feature win.
The outcome wasn’t determined until the top three contenders for the win crossed the finish line.
Haynes was holding off Alex Abbott and Randy Owen as the trio came off the fourth corner on the final lap. The lapped car of Michael Harrold got turned sideways on the front straight with Haynes and Abbott pushing it across the start finish line.
Haynes said it was only the third time he raced in the Front Wheel Drive division and wasn’t about to let the victory slip away.
Haynes took the lead from Jerry Loy on the fourth lap following a restart with an outside pass entering turn one.
The New Castle driver was able to open a comfortable lead following a restart on the 17th lap after Loy spun in turn one.
But with each passing lap Owen and Abbott was slicing into Haynes lead. Several times Haynes and Owen swapped the lead on consecutive laps as they ran side by side.
That set up the final action which gave Haynes the win followed by Abbott and Owen.
George Shields won a wild Trailer Figure 8 race which saw 26 cars take the checkered flag and only Shields running at the finish.
The race was red-flagged on the second lap when a number of competitors got together and almost blocked the track in the first turn.
After the carnage was removed there were only three drivers in contention for the win.
Kamden Creek was the only car on the lead lap with Shields and Nick Warner a lap down.
Warner’s night ended in the cross over after making contact with Creek. Although Creek was able to continue it was Shields that was closing the gap on every lap.
Creek’s heavily damaged car came to a stop on the final lap as Shields drove past for the win.
Ricky Craig scored his first career feature win in the Front Wheel Drive Figure 8 race leading the entire distance in beating Elliott McKinney and Nick Warner to the finish line.
Tony Grissom captured the School Bus Figure 8 competition.