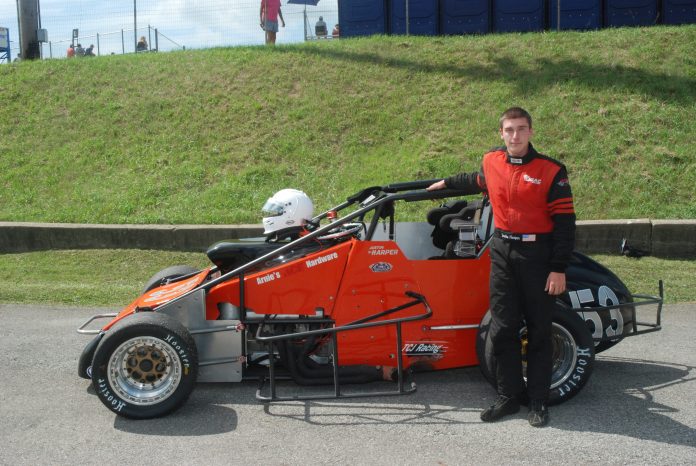 The roller coaster of emotions a driver goes through on bump day for the Little 500 some might say is excruciating. Justin Harper rode that roller coaster this year. The young driver from the small town of Denver, Indiana has been impressive in his limited amount of sprint car starts.

With less than 10 starts in his sprint car, Harper decided to enter the 72nd Annual Pay Less Little 500 presented by UAW just a couple days before the week of events started. The team came out for an open practice the Friday before Little 500 week. This was the first time he had ever driven at Anderson Speedway.

That “good help” is none other than 1989 USAC Midget Champion Russ Gamester and Brother George Gamester. The Peru, Indiana native sold the sprint car that Harper currently drives. It is a Quail-Star Chassis.

“My dad worked with someone that introduced us to the Gamesters,” explained Harper. “They have helped me tremendously when they didn’t have too.”

After CB Fabricating Pole Day for the Little 500 was finished, Harper qualified in the 31st position. Four cars were entered but sitting outside of the starting 33 positions leading into bump day. After the faster qualifying attempts by Bryan Gossel, Ronnie Wuerdeman, and Tommy Nichols, Harper was bumped out of the field. He then returned to the track and bumped himself into the field with a four-lap time of 47.224. He was able to pick up more than a one-second average over his pole day qualifying time.

“Russ really helped me on my line, rolling into the throttle, and breaking points. He has a wealth of knowledge from his years running everything from Sprint Cars to ARCA to Indy Cars.”

At the conclusion of Bump day qualifying, Harper qualified in the 33rd position. He would start in the 32nd position on race day after a driver change took place in the second Jerry Powell Racing entry. Unfortunately, Harper retired from the Little 500 in 31st position finishing only 44 laps.

With a renewed sense of energy, Harper returned to Anderson Speedway for the Thursday Night Sprint Race presented by CB Fabricating on Thursday, September 17. Harper qualified 14th out of 17 cars. With the continued support of his parents and crew Tony and Cherie, he achieved his first top 10 finish at Anderson Speedway. He finished 10th and more importantly finished the race and gained more experience.

“I am running these 125 lap races to get more comfortable for next year’s Little 500. Watching other drivers enter the corner during the last race helped me out a lot,” pointed out Justin Harper.

The 19-year-old driver got his start racing in quarter midgets. From there he graduated to junior sprints and 600 mini sprint sprints on dirt. Harper also competed in the 600 sprint division at the famed “Rumble” at the Fort Wayne Coliseum. Harper has his eyes set on his next goal of running a USAC Silver Crown Car.

Harper is entered to compete in his first ever Tony Elliott Classic this Saturday, October 3 at Anderson Speedway. Pit Gates Open at 2:00pm, Practice/Front Gates Open 4:00pm, Qualifying 5:30pm, and Racing Begins at 7:00pm. FloRacing will cover the entirety of the racing action.