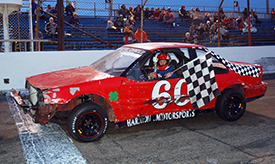 The tight racing in the Front Wheel Drive division continued at Anderson Speedway with Kevin Harmon recording his first win of the season last Saturday.A tight pack of cars battled for the point throughout the entire 20 laps with Billy Hooten, Jerry Dane, Ron Phipps and Harmon all taking a turn in the lead.Hooten grabbed the early lead from the front row chased by Phipps, Dane, Dylan Hoppes and Adam Lee.By lap seven Dane was running out front as Hooten faded with Phipps continuing to hold down the second spot with Harmon moving up to the third spot.The race was red-flagged on lap 11 when Devin Lane spun coming off the fourth corner, tried to right the car but made hard contact with the outside retaining wall on the front straight. Lane emerged from the car unscathed.On the restart Phipps grabbed the top spot with an outside pass of Dane on the front straight. Four laps late Harmon used the same move to pass Dane and started to hunt down Phipps.The two cars ran nose to tail until the penultimate lap when Harmon got inside of Phipps entering turn three. Once on the point Harmon pulled away to win by .7-seconds over Phipps with Lee, Hoppes and Dane rounding out the top five.“We made a bunch of changes to the car so it would handle better,” Harmon said in the Tim Thompson Nationwide Insurance winner’s circle. “The car was faster than in the past.”Harmon also recorded his first heat win of the season on the night again passing Phipps with an inside moving coming off the final corner.Phipps had taken the lead from Hooten on lap eight with an inside move with Harmon advancing to the second position at the same time.The front-running pair was followed by Dane, Lee and Jared Keller.In the second heat race, Marshall Clark used an inside moving coming off the second corner at the mid-point to climb from the third spot into the lead.Paul Phipps grabbed the early lead followed by David Powell and Austin McKinney.Again the field was racing in a tight pack and after Clark made the pass for the lead the running order was shaken up with Ryan Claborn coming home second with Brandon Lee Cook rounding out the top three.