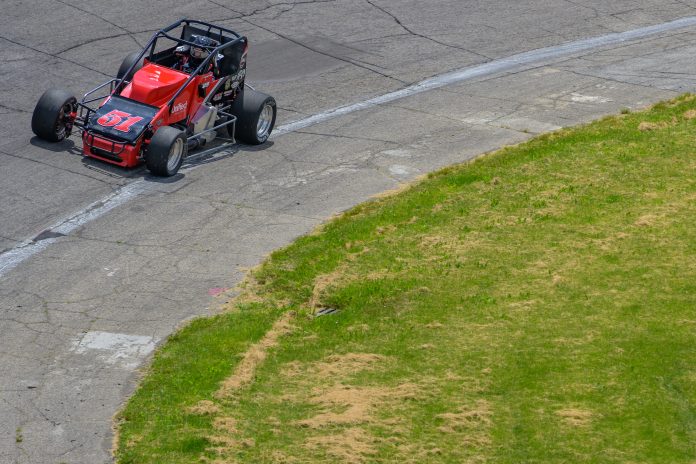 ANDERSON – The fastest field in the 74 year history is set to take the green flag for the Lucas Oil Little 500.

Defending race winner Tyler Roahrig will lead the 33-car field to the start with Brian Gerster and three-time winner Kody Swanson on the front row.

The field from top to bottom is separated by 2.6-seconds and it took an average lap of 11.54-seconds to make the field.

After making a mistake and not changing a left front tire on Thursday, Scott Hampton turned the fastest four laps Friday on Tin Plate Bump Day and will start 16th.

Hampton’s speed of 79.93 miles per hour knocked Mike Anderson from the field.

“Today was a lot better,” Hampton said following his qualifying run. “We had a little mix up and didn’t get the new tire on the car.

“The car was definitely good, need a little more speed,” he said.

Little 500 rookie Larry Kingseed Jr. forewent his high school graduation in Ohio and than road the bubble through the failed qualifying efforts of Tommy Nichols and Tom Paterson.

“We’re sitting on the bubble, but I think we’ll be good if we have to qualify again,” he said.

Qualifying was delayed by rain for a period of time and Kingseed admitted hoping it would stick around.

“I have the speed and just want to put myself in the show,” he said.

Fellow rookie Shawn Bonar had enough speed on his first qualifying attempt when he spun in turn three.

“I was racing hard and waiting for my spotter to tell me to pick it up a little bit,” Bonar said. “Those were the fastest laps we turned all week and just when in a little too hard.

“On the second run I wanted to be cautious,” he said. “It’s awesome making the race, first time here in a sprint car and loving every minute of it.”

Dalton Armstrong became the third member of the Armstrong family to make the race, matching the three Butler family members that accomplished the feat in 2007.

The team battled a leaking power steering unit on Thursday.

“We had problems all day yesterday (Thursday),” he said. “I had no power steering at all.

“I messed up on that one lap drove it in hard and got up into the marbles,” Armstrong said. “Our goal was to make the race, stay out of trouble and see where we end up.”

There are four former winners and seven rookies in the starting field.