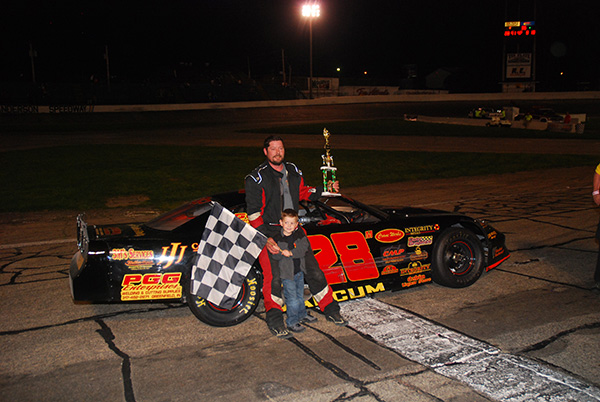 Danville’s Kyle Hamilton repeated his opening win of the Mel Kenyon Midget Series at Anderson Speedway, but it didn’t come without some drama.
With defending series champion Dameron Taylor leading, Hamilton’s night almost came to an end on the sixth circuit.
After starting on the outside of the third row Hamilton and Tommy Kouns made contact on the back straight, the contact sent Hamilton’s midget airborne landing upright.
Hamilton slowed to a stop bringing out the caution flag while Kouns regained momentum and continued racing.
On the restart Hamilton was running at the back of the pack.
The second caution flag waved when Alexandria driver Clayton Gaines bumped wheels with Osborne, coming to rest against the turn four wall.
From the restart all eyes were on Hamilton as he moved into the top five at the halfway point, claiming fourth on lap 18 by passing Logan Huggler.
Three laps later Hamilton drove inside Osborne and Taylor. He started closing on race leader Ryan Huggler, who moved to the point on lap 19.
With two laps remaining Hamilton drove inside of Ryan Huggler for the victory with Osborne, Kouns and Taylor rounding out the top five.
Anderson Late Models
After a devastating start to the 2017 season Jeff Marcum returned with purpose setting quick time, winning a heat race and capturing the feature event.
But the road to the winner’s circle included a detour to the back of the field following an altercation with traffic.
Marcum was running second to Alexandria driver Kent Baledge after 15 laps when the two started a spirited battle for the lead.
Marcum pass Baledge on the front straight on that circuit with Baledge using the car of Curtis Chapman as a pick to reclaim the point on lap 17. Marcum returned the favor a lap later.
With Baledge going to the outside of Chapman, Marcum looked low coming off the fourth corner and contact was made. Chapman spun into the infield with the incident sending both drivers to the back of the field.
Baledge’s night came to an abrupt end on lap 21 when a right front suspension part broke sending the leader’s car into the front straight retaining wall.
Jason Neal led until lap 22 when Marcum made the deciding pass for the victory.
Vores Compact Touring Series
Ohio driver Bo Hoelscher worked his way from the 12th starting spot to pass Joe Jennings after eight laps to win the 30-lap feature sponsored by Modern Trailer Sales.
Hoelscher set a new track record during qualifying and once he took the point pulled away from the remainder of the field for a comfortable win.
Justin Brown and Terry Eaton Jr. earned podium finishes.