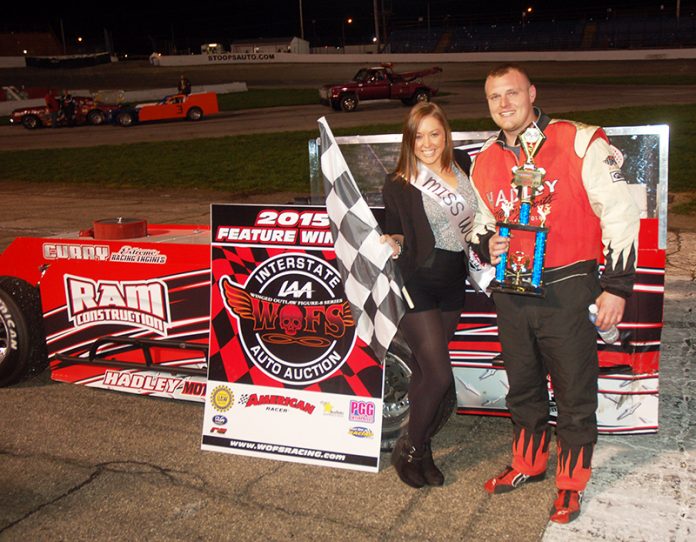 Michael Hadley Jr. opened the defense of his 2014 championship with the Interstate Auto Auction Outlaw Figure-8 Series with a win Saturday at Anderson Speedway.

For the first 40 laps it appeared that Hadley was on his way to an easy win, but for the final ten circuits the two Tunny brothers made it one of the best outlaw figure-8 races the fans have seen for some time.

Hadley was able to open a lead over the rest of the front runners, who got trapped behind slower traffic, which allowed him to run by himself by a quarter of the Anderson Speedway oval.

With 10 laps remaining fast qualifier Ben Tunny and Jesse Tunny started closing the gap on Hadley, running side by side looking for an opening to grab the lead

Hadley took advantage of lapped traffic and having the advantage of running his preferred line to win by less than a second over the Tunny brothers.

Chris Harmon recovered from an incident on lap 21 to finish fourth followed by 2014 series rookie of the year Jacob Garrigus.

“Late in the race when I hit the throttle the car was getting loose,” Hadley said of the Ram Construction sponsored car. “They were right there at the end. I could feel them there. I was just trying to hold on.”

Harmon lost the third spot on lap 21 when he had to take evasive action to miss the car of Jeff Swinford in the crossover. Both drivers were able to continue and no caution flag waved.

Mike Riddle lost the fifth spot on lap 47 when he spun in turn two, once again the action continued unabated.