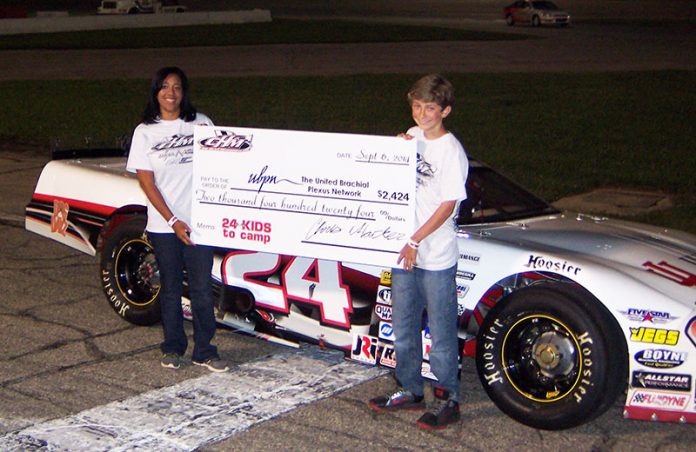 Noblesville teenager Chris Hacker is making a name for himself on race tracks in Indiana, but a bigger accomplishment was raising the funds to send 24 kids to camp.

Hacker suffered from a brachial plexus Injury to his left arm during birth. The brachial plexus is a network of nerves that control the muscles of the shoulder, arm, elbow, wrist, hand, and fingers.

He races a late model with his right hand while his left arm rests against the steering wheel.

Earlier this year Hacker started a campaign to raise $2,400 to spend 24 kids to the annual Brachial Plexus camp in Missouri. The 24 matches the number on his race cars.

The campaign to raise funds to send kids to the camp will continue during the off season with the hope to raise more money in 2015.

Hacker presented the national Brachial Plexus organization a check on Saturday at Anderson Speedway in the amount of $2,424.

Anise Braggs, with United Brachial Plexus Network, said the camp takes place in Missouri from Sept. 26 through Sept. 29 and is a world-wide event. She said families from Australia and New Zealand will be in attendance.

Braggs said the camp includes round table discussions for family members, zip lines, rock climbing and provides the opportunity to meet kids just like themselves.

A total of 49 children will be attending the camp and about 300 people will be in attendance.

“I was surprised Chris was driving a race car, particularly for how young he is,” Braggs said. “For him to raise the funds to send 24 kids to camp is amazing.”

She said Hacker’s desire to send other kids to camp was overwhelming for the organization.

Braggs presented Hacker with the “Youth Determination” award at Anderson Speedway on Saturday.

“Chris has such a great heart at such a young age,” she said of the award.

Chris’s dad, Mike, said he was speechless when his son indicated he wanted to raise $2,400.

“He’s always looking out for other people,” Hacker said. “At one time I was worried about raising the money, but his goal was to do it. He was determined to raise the money.”

Hacker said his son has never attended the camp because they have always been racing on that weekend.

Chris Hacker said his mother, Yvonne, told him about the camp and he decided to raise the funds.

“The condition is common,” he said of brachial plexus. “I can relate to all the kids and adults that have it.”