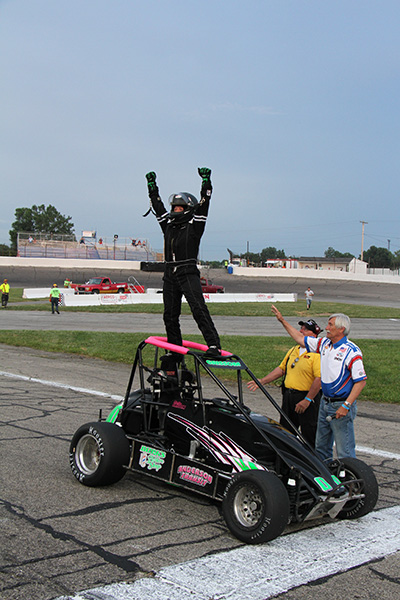 Grissom started on the pole position for the K&M Tool & Die Kenyon Midget feature Saturday at Anderson Speedway when Dameron Taylor had to start on the tail for changing rear tires. At the start Grissom jumped into the lead chased by Kameron Gladish and Tommy Kouns, the previous race winners on the high banked quarter-mile oval. Kouns passed Gladish for the second spot with outside pass entering turn three.

Dameron Taylor, returning to racing action after injuries suffered in an April crash climbed into the top five after 13 circuits. Up until the final seven laps Grissom was running a near perfect race by hitting his marks into and off of the corners to keep his challengers at bay. When the leaders encountered the slower car of Cole Perry the shuffling for position began, but Grissom never surrendered the point. Grissom used both the high and low racing line to get around Perry while Taylor and Gladish used Perry’s car to get around Kouns. Taylor would pass Gladish for the second spot on lap 27 but by that time Grissom had pulled away to a comfortable lead, winning by 1.1 second.

In Vores Compact Touring Series competition Markleville’s Trent Gossar was riding a recent hot streak. Gossar was looking to tie the series record for three consecutive wins and the mark for most career feature wins with nine. Gossar set fast time during qualifying but it was Gary Eaton Jr. that dominated the feature race.

Eaton led the entire distance first chased by Bo Hoelscher, Gossar and his cousin Terry Eaton Jr. The race got off to a slow start when on the second lap it appeared the car of Tom Gossar Jr. suffered a mechanical failure and collected the cars of Cody Shumaker and BJ Honious  along the turn one retaining wall. Trent Gossar took the second spot from Hoelscher on the fifth lap with an outside pass on the front straight, but Terry Eaton Jr. claimed the spot six laps later. Gary Eaton Jr. went on to win by 1.7-seconds over Terry Eaton Jr., Gossar, Jess Drook and Bill Honious.Honious turned in an impressive drive with the fifth place finish after starting 13 in the 26-car field.

Josh Poore won his third Vore’s Welding & Steel Street Stock feature of the year and Chad Cory made it back to back wins in Thunder Roadsters action.