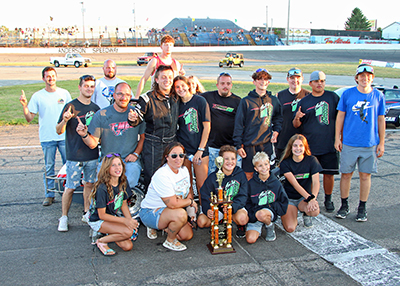 Leading up to the sixth running of the Don and Mel Kenyon Classic there had never been a repeat winner. That all changed Saturday at Anderson Speedway as defending race winner Colin Grissom led all 75 circuits to become the first two-time winner on CB Fabricating night presented by the U.S. Air Force.

Grissom set fast-time during qualification just ahead of point leader Jack Macenko and Ryan Huggler. On the initial start Dameron Taylor spun in turn three and as a result had to start at the back of the 14-car field.

Grissom jumped into the lead chased by Macenko, Huggler, John Robbins and Kyle Ford. By the 12th circuit Taylor was running sixth and Huggler and Macenko had swapped the second spot several times before 25 laps were completed. Taylor and Clayton Gaines both passed Huggler on the 31st circuit to move into the third and fourth spots. The caution flag waved on lap 69 when Tanner Tecco made contact with the turn two wall after a solid performance up to that point. On the restart Ryan Huggler flipped down the front straight after contact with the car of Dave Osborn. Huggler was unhurt.

Taylor moved around Macenko on lap 70, but had to settle for second finishing .3-seconds behind Grissom with Macenko, Gaines and Robbins rounding out the top five. After Grissom learned of his opportunity race in the Kenyon Classic his goal was to become the first repeat winner. “With five laps to go I didn’t know how far everyone was behind me,” Grissom said in the Riley & Sons Victory Lane. “We unloaded the car good and it was good all night. I didn’t want to see the cautions and especially the red flag,” he said. “I was a little concerned that I might have used up the tires.”

In the National Midget feature Kyle O’Gara passed early leader Bobby Santos III on lap nine with an inside move exiting turn four. O’Gara made it three consecutive National Midget wins at Anderson with Santos and Kody Swanson rounding out the top three.