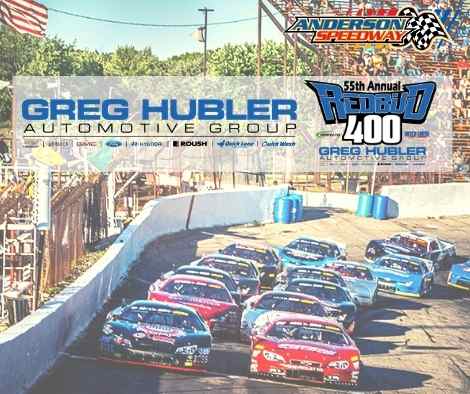 Anderson, Indiana (January 25, 2021) Action Entertainment Inc. is excited to announce the new partnership with Greg Hubler Automotive Group, who will become the entitlement sponsor for the Redbud 400.

The 55th Annual Greg Hubler Automotive Group Redbud 400 is scheduled for Monday, July 12. The race is one of the Crown Jewel Super Late Model races in the country and will continue to be sanctioned by the Champion Racing Association (CRA).

“We are excited to start a partnership with the Greg Hubler Automotive Group,” explained Gary Mong, Vice President of Marketing – Anderson Speedway. “I feel like the two brands complement each other in association with the race. The Redbud 400, year in and year out, produces some of the best stock car racing in the country!”

The Greg Hubler Automotive Group footprint stretches across eight brands in Central Indiana. It has recently expanded to Muncie, Indiana with the Ford and Hyundai brands. In addition, the Ford dealership also houses a Roush Performance vehicles and parts dealership. The sprawling corner of McGalliard and Nebo roads in Muncie houses the two dealerships with the recent additions of Quick Lane Tire and Auto Center and Quick Wash.

“We are excited to partner with Anderson Speedway and specifically the 55th Annual Redbud 400,” commented Greg Hubler. “We are eager to introduce the Greg Hubler Promise and automotive brands in Camby, Muncie, and Marion to the fans at Anderson Speedway!”

The original Greg Hubler Dealership is located in Camby, Indiana on the southside of Indianapolis. The Chevrolet dealership is where the Greg Hubler brand perfected the pillars of their business. New to the Automotive group in 2021 is the GMC/Buick Location in Marion, Indiana.

In the 55-year history of the Redbud, three different sanctioning bodies have been associated with the event. The first two years were ARCA races being 500 lap races in 1967 won by Iggy Katona and Andy Hampton in 1968.

The American Speed Association (ASA) sanctioned the race from 1969 – 1999. Through the 31 years fans saw Mark Martin, Bob Senneker, Alan Kulwicki, Dick Trickle, and Mike Eddy among others park it in victory lane. Mark Martin is the all-time wins leader of the race with four wins.

Champion Racing Association (CRA) will continue the sanction for the 22nd consecutive year in 2021 as part of the ARCA/CRA Super Series. In the 21 years, the likes of Johnny Van Doorn, Kyle Busch, Erik Jones, Daniel Hemric, and Steven Wallace all made it to Victory Lane. Last year Portage, Michigan’s Carson Hocevar steered the TK Racing #71 to victory lane. It was the second consecutive win for TK Racing.

“We are really excited for the new partnership between Anderson Speedway and Greg Hubler Automotive Group,” remarked R.J. Scott, Managing Partner with CRA. “This relationship brings even more recognition for this very important race.”

The Redbud 400 will be 400 laps counting yellows. It will also feature Controlled Cautions, which were used with great success at the last four Redbud 400’s. When a yellow comes out, teams will have three laps to service their race car without losing laps or positions on pit road. Those cars will then line up behind the cars that did not pit at that yellow. Teams not getting out of the pits in the three laps will have to fall to the tail of the field and will risk losing laps.

Greg Hubler has been in the car business his entire life– it runs in his blood. He has followed in the footsteps of his father Howard, both of his grandfathers, as well as his two uncles. Even with this background, it was important to him to understand every aspect of the business. So, after graduating from Indiana University, Greg took time to learn and understand every department.

Over the course of five years while working as the General Manager at Hubler Mazda, Greg earned a reputation as a strong leader. Through his leadership, he guided the dealership to a record level of success in both sales and service. This experience was just the push that Greg needed to start his own dealership. From here, Greg Hubler Chevrolet was first formed.

Greg’s wife, Heidi Hubler, is also part-owner. They have two beautiful children, Cruze and Sailor. Greg has a strong passion for both family and business, which has translated to truly understanding the meaning of “customers come first.” His family has helped him develop a culture within his dealerships that make for an enjoyable experience for both the customers he serves as well as the employees within his dealerships.

With a passion for automotive and the customer experience, Greg has established his pillars of business.

Stay up to date on all of Anderson Speedway’s racing action at www.andersonspeedway.com or follow us on social media.