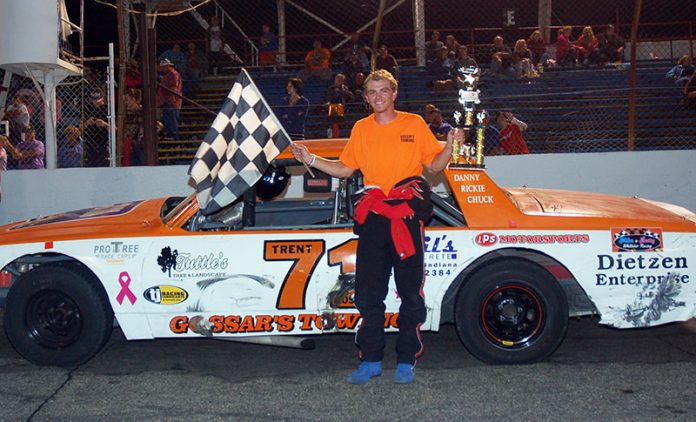 Thanks to an assist from his father Trent Gossar made it consecutive wins at Anderson Speedway in the NASH-FM Thunder Car division.

Tom Gossar and Morte Lewis started on the front row of the feature as a result of an inversion of six from qualifying. At the start Tom Gossar took the lead with Trent running second and point’s leader Robbie Wyman in third.

Lewis was running fourth when he spun in turn two, bringing out the only caution flag in the 30-lap feature.

Tom Gossar elected to take the inside line on the restart, which allowed Trent to take the lead entering turn one.

Before the lap was completed Wyman, Curtis Chapman and Lonny Burton all slipped around Tom Gossar.

Gossar remained out front for the rest of the race with Wyman closing to within 2-seconds of the leader at the finish. Chapman, Burton and Tom Gossar rounded out the top five.

“Dad helped me by starting on the inside,” Trent said in the Tim Thompson Nationwide Insurance Winner’s Circle.

Tom Gossar won the first of the two heat races for the division leading the entire distance. His son, Trent, at times pushed him for the lead.

Burton finished third after passing both Chapman and Wyman on lap four.