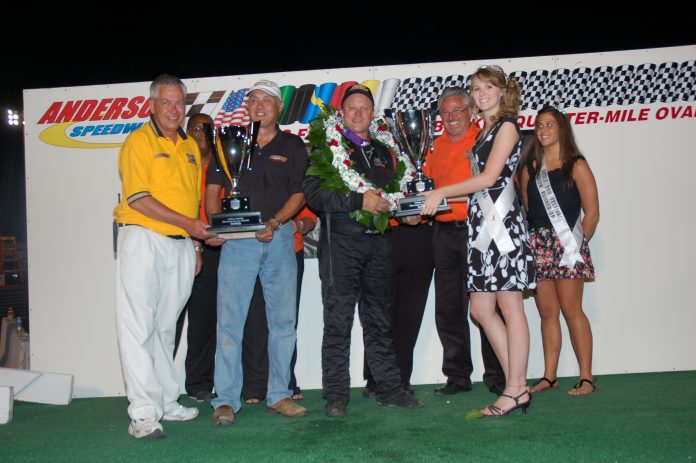 Eric Gordon filed an entry on Thursday afternoon, in hopes of making his 26th Pay Less Little 500 presented by UAW on May 29th. In a surprise announcement, Gordon explained that he will be back behind the wheel of the Mike Bowman owned #2 machine.

Gordon in the past three years has driven for Hoffman Auto Racing and Doran Enterprises. The return to the Bowman team is all too familiar for Gordon. The 9-time Little 500 winner found victory lane with Bowman on two occasions (2007 and 2010) and five other occasions (2001-2005), when the same car was owned by the late Jack French.

The Bowman owned machine may arguably be the most famous car in Little 500 history with seven total wins to its credit. Originally purchased by Gordon’s Uncle Jerry Gordon in 2001, It was sold to Jack French before Bowman acquired it prior to the 2006 race. The car started out as a BEAST chassis in the 1990’s. Tracy Hines at one-time raced the car in USAC competition. Over the years the car has been reworked so many times that it is more of a hybrid car of different ideas and philosophies. The car last won the Little 500 in 2010.

Gordon found himself without a ride prior to this year’s event. He quickly reached out to Bowman asking if he might be interested in bringing the car back again this year. ”I texted him (Bowman) after I’d been let go out of the Doran Racing car for Kody Swanson” explained Gordon. “I tried to find a ride, and nobody wanted to hire me. Mike Bowman and his wife were gracious enough and said come get the car.

He told me ‘you know, I don’t race much anymore. He’s kind of semiretired. He said ‘I only want to run the USAC Silver Crown car a couple of times a year and that’s it. But if you want to run the #2 car, it’s something I want to be a part of. I think as time has passed; he’s getting more excited”.

Gordon is highly confident about his prospects for success, now that he is behind the wheel of the car that brought him the biggest chuck of his Little 500 success. ”I don’t expect anything other than to  run up front with that car, because I have done it so many times. My confidence level is pretty high.”

“It was really last-minute. The people I have been able to assemble, it’s all really come together, and I couldn’t have asked for anything better” concluded Gordon.

If Gordon has his way, he would like nothing better than to pick up his tenth Little 500 win in a car that he knows well and has played a big part in his racing career over, the past 20 years.