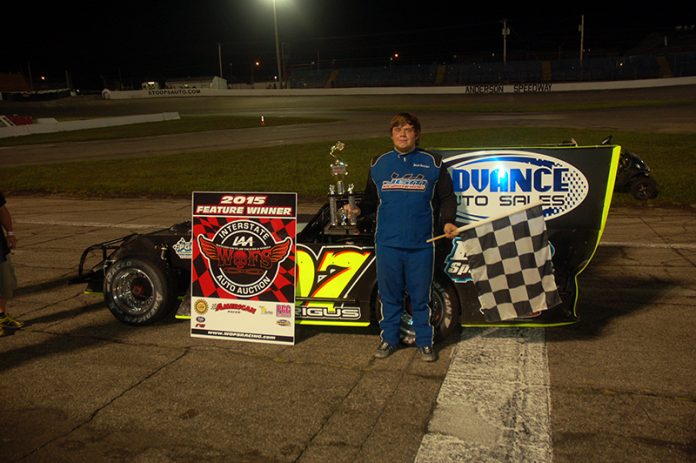 Jacob Garrigus claimed his first career Interstate Auto Auction WOFS feature event Saturday night at Anderson Speedway, and he did it in dominating fashion.
Garrigus, who started the 50-lap feature event in fifth position, made several aggressive first lap passes, and found himself right behind race leader Shawn Cullen after the first lap. Garrigus and Cullen made slight contact and appeared to be momentarily hooked together entering turn three on lap one. Cullen’s car was sent hurling backwards into the outside retaining wall. At the same time, Jeff Swinford’s motor let go and the whole speedway was oiled down, promptly calling for a red flag situation.
After the track was cleared of oil and the Swinford and Cullen machines, Garrigus assumed the point. Garrigus would build a sizeable lead the remainder of the event and would go unchallenged the rest of the way. The battle for second position started to heat up. Second place Mike Riddle had his hands full with Jesse Tunny and defending WOFS champion Mike Hadley Jr. as he held second position.
Tunny was eventually able to get around Riddle and set his sights on race leader Garrigus. This left Riddle and Hadley to battle it out for third position. The duo put on a driving clinic as Hadley worked Riddle the final 25 laps. Hadley tried several time to make a pass on Riddle, but it was nullified each time. Riddle was able to hold off Hadley to claim third place followed by Hadley and Bruce McFall rounding out the top five.
In victory lane, eighteen-year-old Garrigus seemed calm and relaxed as he celebrated his first career WOFS victory. He acted as if he were a veteran driver who had done this numerous times before. Garrigus explained his aggressiveness early in the race. ”There were a lot of fast cars here. I knew I had to get to the front quick” explained Garrigus.” I passed Hadley and Riddle three-wide and tried to get around #111 (Cullen) but I accidently spun him. That was an accident”.
Garrigus continued a torrid pace the remainder of the race once he got out front and did so because he knew Jesse Tunny would be coming. “I was trying to keep a pretty good pace because I knew my teammate (Tunny) was coming after me because he had a pretty fast car too. I knew if I slowed down he would catch up to me”. Garrigus was also aware of the fact that he joins an impressive list of drivers who have won Outlaw Figure 8 events at Anderson Speedway. “It’s pretty neat. It was fun and this is a great track” concluded Garrigus.