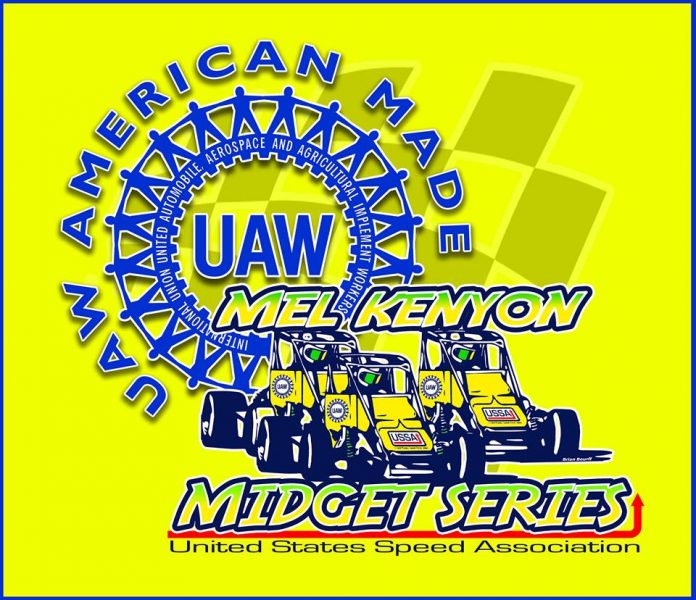 A year ago Clayton Gaines won his first Kenyon Midgets feature win with a dramatic last lap pass, his second career victory at Anderson Speedway on Saturday was dramatically different.
After two aborted starts for the feature race when first Nathan Foster spun in turn two and then Chase Jones and Tommy Kouns made contact in the same corner. Kouns car did a gentle flip with neither driver injured but both unable to continue.

Starting on the pole position as a result of the invert the Alexandria teenager charged into the lead followed by fast qualifier Ryan Huggler and point leader Dameron Taylor.

As Huggler and Taylor battled for the second spot it allowed Gaines to strength his lead.He was able to navigate around slower cars just past the mid-point and drove to the victory.

Taylor passed Huggler for second on lap 21 with an inside pass entering turn three.

Gaines and Taylor were followed to the checkered flag by Huggler, Trey Osborne and Cole Christy.

Tharp won the feature event for the third time in the last five races and if not for a loose spark plug wire on July 2 it would have been four wins in five races.

Anderson driver Jeff Williams, entering the night as the point leader, was the driver on the move throughout the 25 lap feature event.

Williams used an inside move coming off the second corner on the second lap to pass Merchant and got inside of Keeley for laps later driving the high line off the fourth corner.

With Tharp and Phipps staging a spirited battle for the lead, Williams passed Allmond for third on the 21st circuit and got around Phipps for second.

Tharp won by a half-second over Williams with Phipps, Almond and Keeley rounding out the top five.

Thunder Cars
Thunder Car action after having to make some last minute repairs at Anderson Speedway.
The crew made the repairs that allowed Hoppes to claim the quick time and started fifth for the feature.

Elwood’s Bruce McFall took the lead on the second lap as Hoppes started to climb through the field moving into the second spot on lap 11 with a pass of Jerry Swinford Jr.

Hoppes closed on McFall and after running side by side for the lead make the deciding pass on lap 15.

Behind Warner Owen and Mike Alley swapped the second spot several times before Alley prevailed with two laps remaining to claim the position.