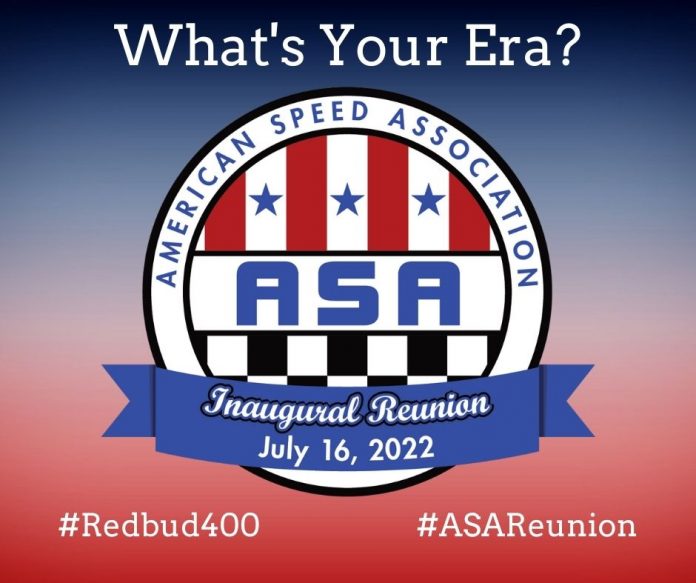 The two former champions of the race are the first of what officials expect to be several drivers, car owners, officials and staff associated with the Pendleton based sanctioning body who plan to attend.

“We’re thrilled to see these two former Redbud 400 winners coming back to Anderson,” stated Rick Dawson, owner of Anderson Speedway. “We expect several other drivers, and look forward to seeing the many racers, crew members, officials and sponsors who were such a big part of the Series.” Dawson, who worked as an official for ASA, purchased Anderson Speedway from Series Founders Rex and Rebecca Robbins in 1997.

The Redbud 400 was one of the marquee events on the ASA schedule from 1969 through 1999, and today is one of the signature events on the ARCA CRA Super Series Schedule. The 56th Annual Greg Hubler Automotive Group Redbud 400 presented by Mitch Smith Auto Service and Perfecto will feature a touch of nostalgia in 2022 with the previously announced ASA reunion. Advance sale tickets are available by calling Anderson Speedway (765) 642-0206. A limited number of VIP passes (including race ticket and hospitality) are available to the ASA Reunion event, which will be held prior to the race.

Green Bay, Wi racer Scott Hansen never won an ASA National Championship, but was one of the best

and most successful drivers in Series history.

Cutting his teeth on the dirt short tracks in central Wisconsin in the 1970’s, Hansen transitioned to

pavement racing in the Badger state in the early ‘80’s, racing agains the likes of future NASCAR Cup

From there, Hansen packed his bags and moved from Green Bay to Milwaukee, where he began driving full time on the ASA circuit for Baker Motorsports, Gerry Gunderman, Fanetti Motorsports and Ken Schrader Racing. He was the 1989 ASA rookie-of-the-year.

Hansen would go on to post 26 wins during his career, ranking him 5th All-Time. In addition, he sits in the top 10 in almost every major statistical category in ASA History, including:

In addition, Hansen is a three-time winner of the Redbud 400: 1991, 1993, 1998. There will be an open practice for the 56th Annual Greg Hubler Automotive Group Redbud 400 presented by Mitch Smith Auto Service and Perfecto on Friday afternoon, July 15. Then on Saturday, July 16, pit gates will open a 11am, and ticket sales and spectator gates will open at 3:30pm. The ARCA CRA Super Series Powered by JEGS will practice at 1:30pm, with qualifying at 4:30pm.

Anderson Speedway is located at 1311 Martin Luther King Blvd. in Anderson, IN.