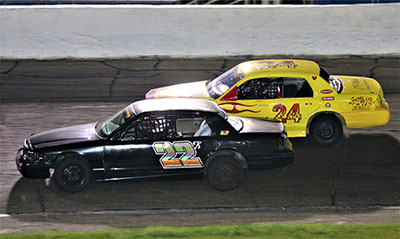 The biggest event of the year for the Hart’s Auto Center Ford Division is actually three races in one. As many as 50 Ford Crown Victoria’s are expected to be compete in the eBay Motors Triathlon on Thompson Insurance, Community Hospital of Anderson and Peterman Brothers night at Anderson Speedway.

The Crown Vic drivers will be competing in three features with a separate point fund created to crown an overall champion. The night starts with a 30-lap feature in the normal direction around the high banked quarter-mile oval. That’s followed by running 30 laps in the opposite direction and concludes with a 30 lap Figure 8 race. Drivers will be lined up for the first feature based on qualifying times with random draws to set the field for the final two feature races. The overall champion based on best finishes in all three races will receive a $500 bonus. Andy Keller and Logan Caudill won Figure-8 races during the season with Frank Hardcastle recording two runner-up finishes.

The Marcum’s Welding Front Wheel Drive and ThunderCar divisions will also be in action along with the Midwest Champ Karts. Qualifying is set for 4:30 p.m., with racing at 6 p.m. Adult tickets are $15, $5 for children between the ages of 5 and 12 and children under 5 are admitted free.