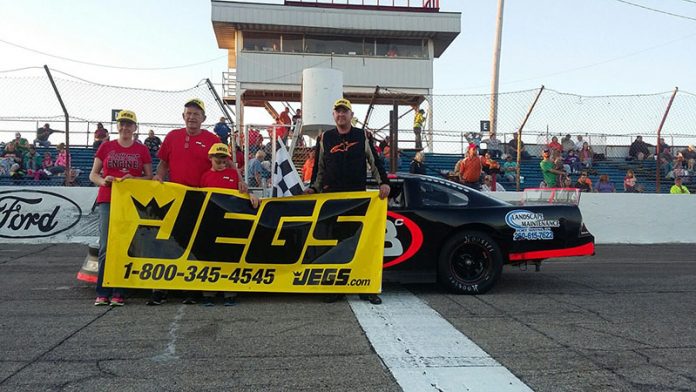 Fisher took advantage of an Ivy Tech Community College restart on lap 14 to use the outside groove to get around early leader Shawn Amor.

Amor was passed seven laps later by fast qualifier Jeff Marcum, who used the inside line on a restart to move into the second spot.

For the next 54 laps Marcum stayed close to Fisher’s rear bumper but was never able to get into a position to make the pass.

Fisher was able to maintain the top spot over Marcum despite two more caution periods in the final two-thirds of the race.

Eddie VanMeter finished third despite a spin on lap 17 while battling for the second position with Amor.

VanMeter moved into the third position on lap 52 but without another caution period, but could not close the gap on the two leaders.

Keith Sterkowitz and Amor rounded out the top five.

Kyle Hamilton returned to Mel Kenyon Midget action after being away for three years and immediately returned to the winner’s circle.

Pole sitter Trey Osborn led the first six laps of the feature event before being passed by Dameron Taylor and Hamilton.

Hamilton and Taylor would battle for the lead over the course of the remaining 24 laps.

Hamilton took the lead for the first time on lap 13 with an inside pass of Taylor entering turn three. Following a red flag on lap 16 when three midgets tangled in turn four, Taylor made an impressive inside pass entering the third turn.

But Taylor’s lead was short-lived. Five laps later Hamilton was able to dive to the inside exiting the fourth corner and led the remainder of the race.

In Vore’s Compact Touring Series action local driver Nick Warner led the first 22 laps of the feature event until a restart changed the complexion of the race.

Warner appeared to miss a shift which allowed Jeff Williams to roar pass on the outside and go on to the victory.

Williams had Warner on his rear bumper the rest of the distance but was able to hold off several challenges. Ron Phipps, Andy and Chris Jennings rounded out the top five.