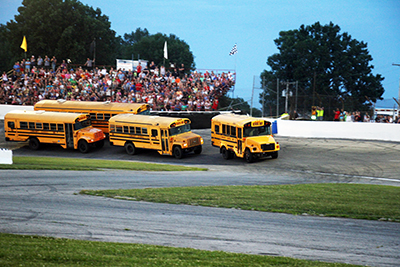 There will be fireworks on the track at Anderson Speedway and in the skies during two nights of racing action this week. The speedway will be hosting the traditional Community Hospital Figure 8 Madness on Thursday presented by the Anderson/Madison County Visitors Bureau starting at 7:00 p.m. with the Outlaw Figure 8’s in a 50-lap feature at the crossover.

No Figure 8 Madness night would be complete without the popular School Bus and Trailer Figure 8 races. The night is topped off by a fireworks display. Qualifying is set for 5:30 p.m. with racing action at 7:00 p.m.

There will be five divisions in action on the high banked quarter-mile oval on Saturday topped by the Vores Compact Touring Series.

There were 45 cars on hand in April the last time the series visited Anderson Speedway with Trent Gossar holding off Tom Gossar for the win. The Vores Compact Touring Series will include a 30 lap Powder Puff feature along with the regular events.

The K&M Tool & Die Mel Kenyon Midgets return where Tommy Kouns will be looking to make it three wins in a row. Defending champion Dameron Taylor is expected to return to action following an accident in a sprint car earlier this year.

The Vore’s Welding & Steel Street Stocks return where Josh Poore and Bret Miles Jr. have recorded victories along with the Thunder Roadsters.