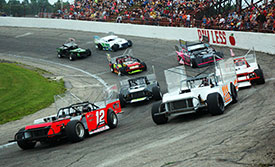 A huge double header weekend at Anderson Speedway kicks off on Friday, July 4, with Figure 8 Madness presented by 106.9 Star and The Excel Center. A huge fireworks show will take place after the exciting racing lineup of Winged Outlaw Figure 8 Series (WOFS), Front Wheel Drive Figure 8’s and Tom Raper RV Trailer Race. On Saturday, July 5, racing will move to the oval with CRA Late Model Sportsman, NASH FM ThunderCars, Front Wheel Drives Oval and Super Karts. WOFS will be back in action after nearly three months of inactivity. Headlining a stout field of drivers will be Jeff Shackleford who won the inaugural WOFS event at Anderson Speedway on April 5. Shackleford waged a fierce battle with Mike Hadley Jr. for the win and cemented his name in the history books by winning the first-ever WOFS event.The series enters the Anderson event with a tight point’s battle ensuing. Eight drivers are separated by a mere twelve points. Hadley Jr. is currently holding a 1 point edge over Shackleford with former IOFS National champion Jeremy Vanderhoof just 4 points behind in third.The race for Rookie of the Year currently belongs to Jacob Garrigus. Garrigus was impressive in his first Late Model Figure 8 start April 5. Garrigus was a serious threat to win after taking the lead only to spin. The young rookie battled back to salvage an eight place finish.The WOFS will highlight the evening with a huge 50-lap feature. The “Figure 8 Madness” event has been an annual staple on the Anderson Speedway schedule since 2001, although Outlaw Figure 8’s have not been a part of the program all 13 years. Ben Tunny is the defending champion of the Outlaw Figure 8 portion of the event.Randy Owen sits atop the Front Wheel Drive Figure 8’s standings with a 58 point lead over Kamden Creek. Third is Jeff Williams with Randy Hoppes and Elliott McKinney filling out the top five. On Friday, July 4, spectator gates open at 4 p.m. with the racing beginning at 7. Admission is $12 for adults and $4 for kids ages 6-12. Children five and under get in free. The CRA Late Model Sportsman/McGunegill Engine Performance Late Models will be back in action in the co-sanctioned event on Saturday with a 75-lap main event. In the most recent event at Anderson, Greg Van Alst earned his first career victory when he paced the entire distance of the Motion Motors 100 on Friday, June 13. He was followed across the finish line by Quinnten Bear with Mark Lambert in third position. Jack Dossey lll and Kent Baledge rounded out the top five. In the NASH FM ThunderCars, three consecutive victories have placed Robbie Wyman in first position in the standings. He leads Curtis Chapman by 54 markers. The remainder of the top five includes Lonny Burton, Morte Lewis and Austin Russell. Jerry Dane holds a 121 point advantage over Jared Keller in the Front Wheel Drive Oval. Third is Brandon Cook with Dylan Hoppes and Billy Hooten filling out the top five. The Super Karts make their second appearance at Anderson Speedway on Saturday Night. In the opening event that was held in early May, Kenny Smith took the checkered flag over David Reynolds and Jason Reynolds. On Saturday, July 5, spectator gates open at 5 p.m. with the racing beginning at 8. Admission is $12 for adults and $4 for kids ages 6-12. Children five and under get in free.