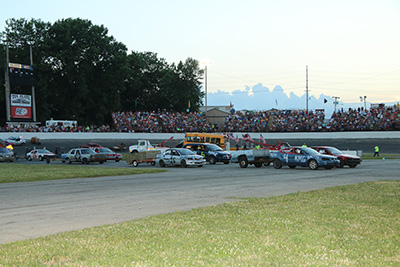 There will be a variety of action in the cross over during Figure 8 action at Anderson Speedway on the Best Way Disposal Night of Thrills. The action starts at 7 p.m. Saturday and the night of unique racing will be topped by a fireworks display.

The ever popular Trailer Figure-8 Race is on the program where 26 teams competed in two feature events on July 4 with veteran drivers Bruce McFall and Elliott McKinney avoiding the carnage to post victories.

The night will mark the first appearance of the Crown Vic competitors taking on the Figure 8 course in a 15 lap feature event that promises lots of thrills at the “x”.

The Marcum Welding Front Wheel Drive division will be in action on the oval and in a Figure 8 where veteran Nick Warner captured the victory in an exciting duel to win the Figure 8 race.

The Front Wheel Drive competitors will also participate in the “corkscrew race” where drivers have to circle an obstacle in the “x” and continue on in competition.

The Night of Thrills also includes a roll over contest. Spectator gates open at 4:30 p.m. with qualifying at 6 p.m. and racing action at 7 p.m. Adult tickets are $15 with children between the ages of 6 and 12 admitted for $5. Children under the age of five are admitted for free.