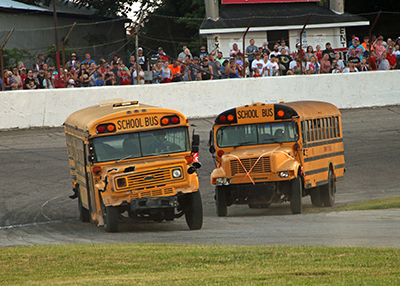 There was plenty of rubbing and racing during Carter Express Night of Thrills on Labor Day. The action in the Figure-8 course started with the first feature of the night and ended with a melee during the Prairie Farms Trailer Race.

Before fans settled into their seats the Marcum’s Welding Front Wheel Drives was red-flagged on the opening lap when Josh Tharp spun through the cross-over and landed on the top of a concrete barrier in turn one. When action resumed fast qualifier Ricky Craig took the lead chased by Nick Warner and Kamden Creek. The two leaders made contact on the front straight of the crossover on lap four and their cars locked together. Creek took the point followed by Elliott McKinney and David Powell with McKinney taking the lead on lap 11. But a lap later McKinney slowed and was out of contention which put Creek back into the lead. Powell made an inside pass on Creek coming off the fourth corner and Warner was caught up in the mix. When Powell was disqualified following the race Creek was awarded the win followed by Damien McGuire and McKinney.

Andy and Jared Keller battled through most of the Hart’s Auto Center Ford Division Figure-8 race with the two swapping the lead twice in 15 laps. Andy Keller made the crucial move on lap 12 with an inside pass on the front straight. Keller said it was his first victory in a decade. Frank Hardcastle and James Mikesell rounded out the top three.

Despite losing the brakes in his ride McKinney won the Corkscrew race over Cody Riley and Francisco Santiago. Colin Grissom won the School Bus Figure-8 leading the entire distance despite making contact with the outside retaining wall. Nick Warner won the Trailer Race after a massive crash in the cross-over took out more than half the field. 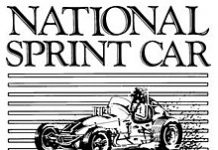 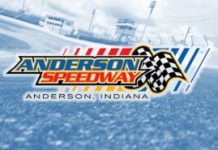 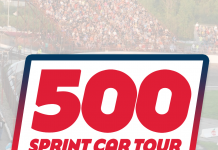