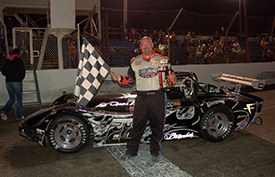 Chris Weddel’s bid for a third consecutive feature win in the Thunder Roadsters Division ended early, but his teammate James Edsall III grabbed the win.Weddel was involved in a frightening looking crash in the heat race when Darrell Brown was unable to slow entering turn one on the second lap. Weddel’s roadster rode over the back of Brown’s car, flipping before coming to rest upside down against the outside retaining wall. Both drivers were injured, but were done for the night.In the feature race, Alexandria driver John Robbins tool the early lead chased by Edsall. Edsall grabbed the point on the fourth lap with an inside pass of Robbins entering the first corner.From there Edsall pulled away to win by almost three-seconds over Marty Griffin with Robbins coming home in third.“We race out of the same stable,” Edsall said in the Tim Thompson Nationwide Insurance Winner’s Circle, of Weddel. “I’m glad to see both drivers okay, you can always fix a car.“This car has been dominant here in the past,” he said. “We’ve had to make some adjustments.”Mark Dietzen recorded his first ever win in the division by leading the entire distance, holding off a late charge by Edsall.Dietzen won by .121 seconds over Edsall with Griffin finishing third.