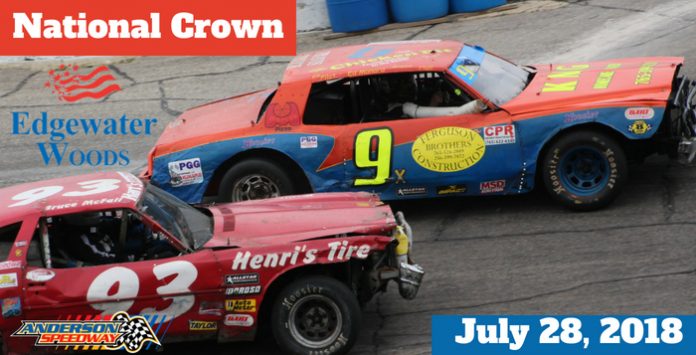 Anderson Speedway will again play host to the longest continuous stock car race in the United States this Saturday with the 69th running of the National Crown.
The Hart’s Auto Figure-8 Division drivers will be competing for 50 laps through the crossover in hopes of taking home the $1,500 purse to the winner on Edgewater Woods Alzheimer Awareness Night.
The Champion Racing Association Vore’s Welding Sportsman Late Models will be in action with a 75-lap feature along with the Marcum’s Welding Front Wheel Drive and CSR Mini-Cups in racing action.
The National Crown this year will feature Thunder Cars with at least three former winners expected to compete.
Shawn Cullen won the National Crown in 2017 and has won the past two features in the division after taking the place of Ronnie Phipps behind the wheel earlier this year.
Curtis Chapman won the National Crown in 2001 and 2010 and is back in competition where only a mechanical problem has prevented a visit to the Star Financial Winner’s Circle.
Nick Warner, the 2008 National Crown champion, has recorded a feature win this year. Another former winner Ronnie Rose (2004) could return to Figure 8 action seeking a second National Crown victory.
In Sportsman Late Model action Jeff Marcum is coming off back to back CRA wins at Mt. Lawn Speedway and in the PGG 100 on July 14 in the first two of the three Triple Crown events.
Marcum is also a perfect five for five in McGunegill Engine Performance Late Model wins at Anderson Speedway.
Danny Trent and Tommy Cook have also recorded CRA wins. Chris Shannon is the current point leader followed by Tony Brutti and Zachary Tinkle.
Qualifying is set for 6:30 p.m. with racing action at 8 p.m.
Adults tickets are $12, $4 for children between 6 and 12 years of age and under six admitted for free.