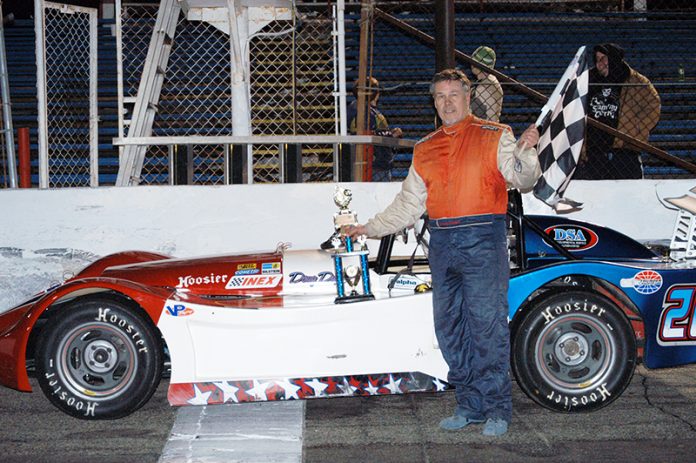 Doug Dugger used the inside line to pass early leader Tony Holden entering the third turn and went on to open the season with the feature win in the Thunder Roadster Division.

John Robbins got around Holden on the next lap and was able to maintain close contact with Dugger actually making a run on the inside with five laps remaining.

Dugger was able to open a car length lead over Robbins for the victory.

Before a lap was completed Butch Myer made contact with the turn three wall. When the International Auto
Auction green flag waved it was Holden grabbing the point, but by the third lap he was passed by Dugger and Robbins.

Rodney Oliver lost the fourth spot on lap nine when he got loose in turn four and drove through the infield, surrendering several spots.

“It was a lot of fun,” Dugger said of the victory. “John (Robbins) is a great guy to race with.”
Robbins racing with sponsorship from Kleenco pass Dugger with two laps remaining with an outside pass going down the back straight.

Dugger took the lead at the start chased by Holden, who was passed by Robbins on the second lap.

Following Robbins and Dugger to the checkers were Griffin, Holden and Dietzen.

Oliver in the Sam Pierce Chevrolet sponsored car proved that age was no barrier to scoring a victory.

At the age of 67, Oliver passed Myer with five laps remaining in turn three to record the win followed by Brad Kendall and Myer.