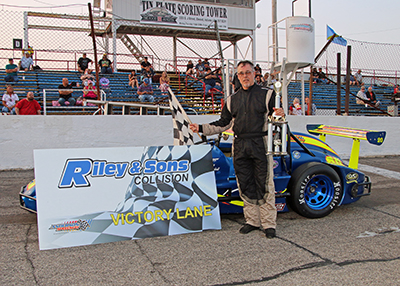 Defending Thunder Roadster champion Doug Dugger had to work his way through the field to score his first feature win of 2021. The Greenfield driver has set fast time at Anderson Speedway during qualifications and repeated the feat on Saturday.

Dugger started eighth in the field following the inversion and methodically worked his way to the top spot in a race that saw four different leaders. Bob Lemons took the early lead but was passed by Brad Kendall with an inside move on the front straight on the third lap. Kendall led until lap 12 when Chase Lane used the low groove through turn three to claim the lead. By this time Dugger had advanced to the third spot. Dugger moved to the point on lap 14 with an inside pass of Lane coming off the fourth corner. Austin Cory moved into the second spot four laps later and Jason Powers moved into the third position on lap 21. Powers passed Cory on lap 23 but finished a half-second behind Dugger with Cory rounding out the top three.

Defending McGunegill Engine Performance Late Model champion Jeff Marcum continued his streak of podium finishes. Marcum won for the third time this season to go along with two runner-up finishes in five events. The early lead was taken by Muncie’s Buddy Davis with Marcum moving into the second spot on the opening lap following the four-car inversion from qualifying. Davis was able to hold off Marcum for the top spot until the first caution flag waved on lap seven for an incident involving Jeff Whaley II and Mike Sargent in turn four. On the restart Marcum powered around Davis entering turn three to grab the lead. Whaley recovered from the early incident to pass Davis for the second spot on lap 21, but was never able to close on Marcum.

A season high 19 Hart’s Auto Center Ford Division drivers were on hand, many from southern Indiana, with five of them sweeping the top five spots. Chris Workman led all 25 laps but was pressed the entire distance first by Matthew Adams and then Jamie Harbin. The five cars ran nose to tail for all 25 laps several times running three wide in the corners to get around slower traffic.

Jimmy Kirby won for the fifth time in Thunder Car action chased as he has been all season by Ron Phipps and Earl Adams.