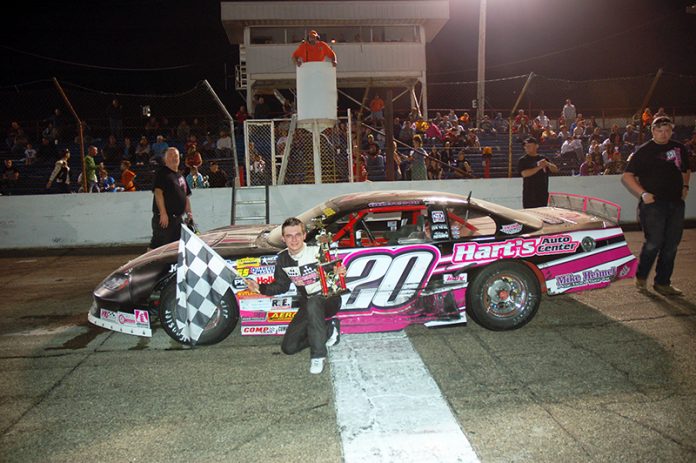 There wasn’t a full moon on Saturday night, but there was plenty of rubbing and racing during the McGunegill Engine Performance Late Model feature that saw Jack Dossey III collect the victory.

For the second time this year Dossey set fast time during qualifying and started sixth in the 15-car field, never running outside of the top five.

On the final restart with three laps remaining Dossey was able to hold off Jeff Marcum, who had qualified second quick. Danny Trent passed Marcum with an inside move entering turn three to finish second with Marcum coming home third.

Dossey said he won the race for his grandfather, who recently passed away.

“We had some mechanical issues the first week,” he said. “I was on a mission; nothing was going to keep me from the win.”

Dossey driving the Hart Auto Center Chevrolet said on the final restart he didn’t want to make a mistake and to make sure he cleared Marcum entering turn one.

On an Interstate Auto Auction restart Rose got shuffled back from second to sixth with Danny Trent moving into the second spot on Madison County Storm Water Partnership night at Anderson Speedway.

Trent tapped the back of Baledge’s Chevrolet in turn bringing out the second caution flag and putting defending champion Dossey into the lead.

The third yellow flag was displayed when Jason Neal got loose in turn four and involving the cars of Rose, Jeff Marcum and Darrell Draper. Only Neal was unable to continue.

Following the restart both Rob Allman and Joe Woodring were slowed by mechanical problems while running in the top five.

Trent and Baledge worked their way from the back of the pack to be running third and fourth when the final caution flag waved when Larry Swinford spun in turn four, setting up the three-lap shoot-out.

Making his first start of the year Robbie Allman led all ten laps of the fast heat race to pick up the $100 bonus from PGG Industries.

Allman was chased the entire distance by Joe Woodring. Dossey passed Rose on the final lap with an inside move coming off the fourth corner to finish third.

In the second heat race Darrell Draper passed Brian Morrow for the lead on the third lap with an outside pass on the back straight, the same move he made to pass Walter Thomas III a lap earlier.

The driver on the move was Jon Heck who moved into the fourth spot on lap three by following David Clark inside of Thomas entering turn three. Three laps later Heck used the high line to pass both Clark and Morrow on the back straight to finish second.