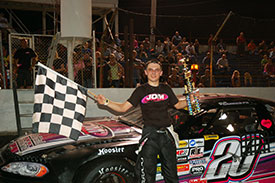 Jack Dossey III led the final 12 laps to record his first career victory in the McGunegill Engine Performance Late Model feature at Anderson Speedway.Dossey set fast time and started sixth in the feature, inheriting the lead when the front runners ran into trouble with a lapped car on lap 23.Wes Russell Jr. recovered from an early spin to finish second with Kent Baledge, Joe Woodring and Jon Watson rounding out the top five.“I’m amazed right now,” Dossey said of his win in the Tim Thompson Nationwide Insurance winner’s circle. “I wanted to stay smooth and consistent. I didn’t want to give up the bottom (groove).”Jeff Marcum started from the pole position and races side by side with Wed Russell Jr. for the first five laps before taking a clear lead.Russell spun on lap 10 which put Greg VanAlst into second followed by Billy VanMeter.Marcum’s bad luck in 2014 continued when Thomas Huffard spun in turn three on lap 23 and collected the race leader. VanAlst’s car offered some front end damage but was able to continue.It was the second consecutive race that Marcum was involved in an incident while running in the lead.On the restart VanAlst’s right front tire locked up entering turn three and he made contact with VanMeter, who was able to continue.Danny Trent’s bid for a fourth consecutive win went up in smoke during his heat race.Dossey set fast time with a lap of 13.112-seconds which was one-thousandth of a second quicker than the time posted by VanAlst.VanAlst scored his first win of 2014 by claiming the first of two heat races by passing Tyler Marsh with an outside move on the front straight following a restart when Marcum spun in turn two.Dossey climbed from outside the top five to record a second place finish followed by VanMeter, Watson and Russell.Ronnie Phipps led the entire distance to record his first win of the year in the second heat race. He was followed to the checkers by Rob Allman, Orie Parkhurst, Ronnie Rose and Baledge.