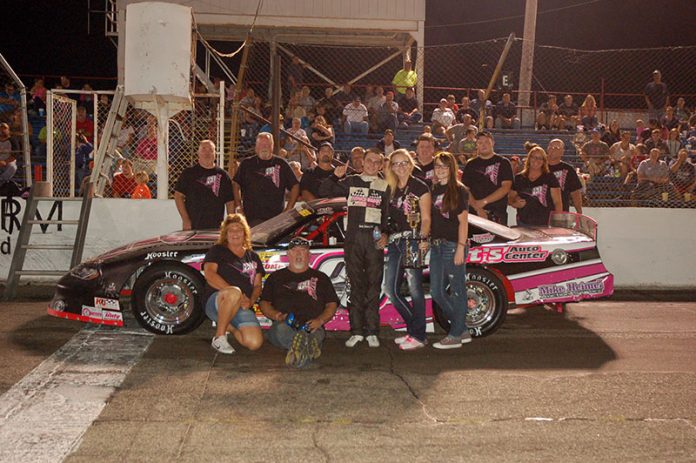 Jack Dossey III made a daring pass to claw his way from third to the lead and capture his fifth feature win in McGunegill Engine Performance Late Model competition at Anderson Speedway.
With an invert of eight following qualifications on Anderson Sesquicentennial Night at Anderson Speedway presented by the Madison County Visitor’s Bureau, Tyler Marsh grabbed the point chased by Ronnie Rose and Jeff Marcum.
The driver on the move through the first third of the race was Jason Neal whop used the high groove to the third spot.
Dossey, the defending track champion, climbed to third when the first caution flag waved when Rose and Jason Neal tangled on the front straight. Before another lap could be completed Dave Clark and Tanner Ballard made contact in the second corner.
Two laps later Dossey drove underneath both Marcum and Marsh to take the lead and Danny Trent moved into the second spot a lap later.
“It was one of those moves,” Dossey said in the AutoFarm McCrocklin Ford Winner’s Circle. “I hoped it would work, the racing gods were with me.”
The third caution flag waved on lap 15 when Marsh and Neal got together on the main straightaway and both came to a stop along the turn one wall.
Through two more restarts Dossey was able to maintain the lead over Trent, Marcum, Wes Russell Jr. and Joe Woodring rounding out the top five.
“Danny (Trent) always races me clean,” Dossey said.
During qualifications Dossey claimed his sixth quick time of the year and recorded his fifth feature win to pad his point lead over Marcum.
John Heck appeared to be on his way to a win in the first heat race when his car slowed dramatically on the ninth lap.
Heck had led from the start while Marcum, Marsh, Woodring and Dossey battled for the second and third spot.
With Heck pulling off the track that gave Marcum the victory followed by Dossey and Woodring.
Dave Clark led the entire distance to win for the first time in 2015 in the second heat race.
Rose finished second followed by Walter Thomas III, Darrell Draper and Tanner Ballard.