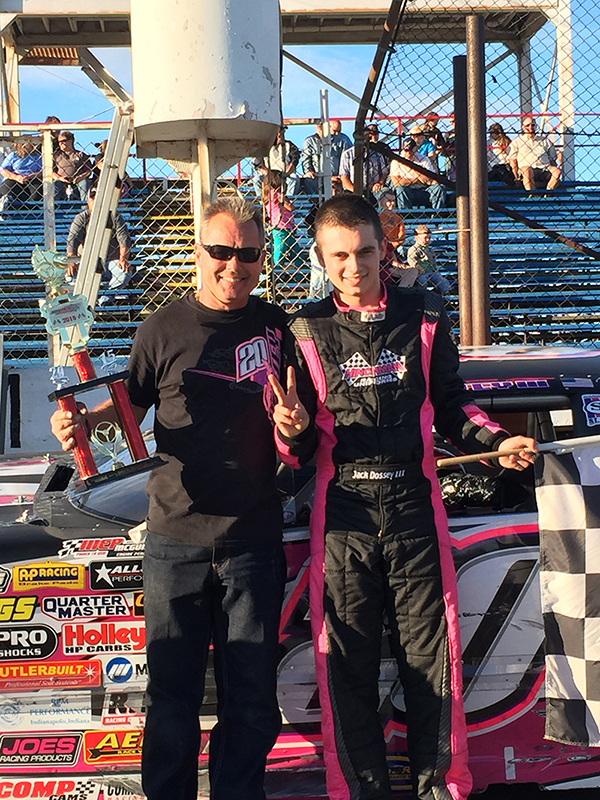 Dossey set fast time and turned back an early challenge from Jeff Marcum to lead all 40 laps of the feature event.

Entering the last race of the championship season, Dossey had a 68 point lead over Marcum, who got trapped behind a lapped car midway through the race.

Dossey was able to open a comfortable lead over Marcum to pull away to the victory. Danny Trent came home in third followed by Wes Russell Jr. and Jason Neal.

Neal’s fifth place finish allowed him to claim third in the season point battle over Joe Woodring, who finished sixth.

Dossey said in the AutoFarm McCrocklin Ford Winner’s Circle that he dedicated the season to his grandfather, who died earlier in the year of cancer.

The team had to go to a back-up car after the primary car lost an engine in practice.

Poore won the Street Stock championship in 2011 to go along with a Thunder Car and Late Model title at Anderson Speedway over the years.

The veteran driver led all 30 laps to record his seventh feature win after setting fast time during qualifications for a seventh time this season.

He led all 35 laps and held off Calvin Parham on a restart.

The caution flag waved on lap 12 when Nick Warner appeared to have a suspension failure and hit the turn four wall. On that restart Joe Pulley and Jamie Ward got together in turn one.

Poore maintained the lead on the restart and cruised to the victory. Calvin Parham came home second chased by Andrew Cook with Willie DeHart and Travis Brown rounding out the top five.

He was followed to the checkers by Matt Tharp, Jared Keller, Jerry Dane and Nick Warner.