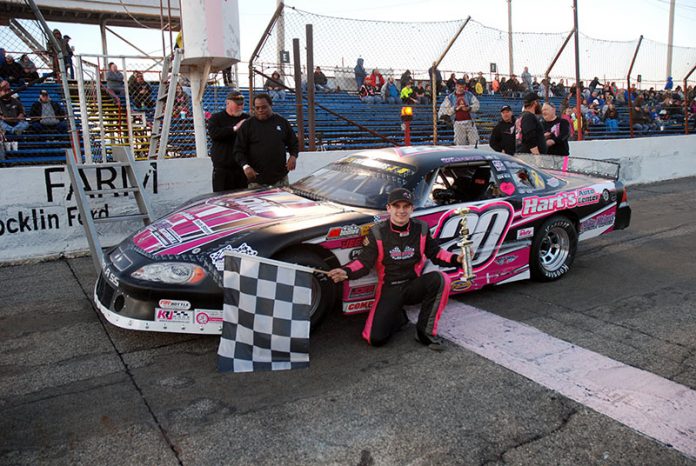 Dossey, the two-time defending champion in the division, Saturday made one of his few starts at Anderson this season because he is running for rookie of the year honors in the Champion Racing Association/JEGS All Stars Tour traveling series.

On the sixth circuit, Hornish tangled with Jon Heck and Joe Woodring, coming to a stop against the Turn 1 wall. Hornish, the niece of Indianapolis 500 winner Sam Hornish Jr., was the only driver that was not able to continue in action.

Following the Ivy Tech green flag restart, Dossey took advantage of the outside line to power around Marcum and remained out for the rest of the distance.

“I got to use my favorite move on the outside,” Dossey said in the winner’s circle. “I was a little worried at the end because Jeff (Marcum) was starting to close the gap.”

It was Dossey’s third consecutive win in late model action dating back to the 2015 season.

Behind the two leaders, Trent and Cave swapped the third spot with Jon Watson running a consistent five.

With 10 laps remaining, the leaders came up on a three-car battle for sixth between Woodring, Heck and Brian Morrow.

Dossey was able to work around the lapped cars, and although Marcum closed the gap he was never able to challenge for the win.

Trent set fast time during qualifications with a lap of 12.877-second topping the lap of 12.898 by Dossey with Cave posting a time of 13.15-seconds.

The second heat was captured by Joe Woodring, his second consecutive win dating back to the 2015 season.

Woodring led the entire distance with Jon Watson finishing second when Jon Heck spun on the final circuit while battling for second.