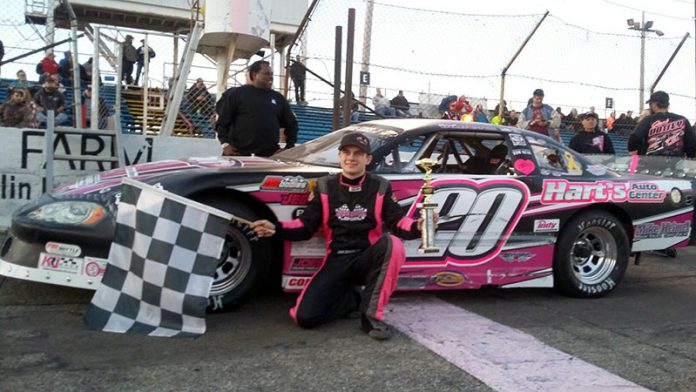 Jeff Marcum grabbed the lead from Hope Hornish, making her first ever start of the season at Anderson Speedway and was quickly chased by Dossey, fast qualifier Danny Trent and Josh Cave.
On the sixth circuit Hornish tangled with Jon Heck and Joe Woodring coming to a stop against the turn one wall. Hornish was the only driver that was not able to continue in action.
Following the Ivy Tech green flag restart Dossey took advantage of the outside line to power around Marcum and remained out from the rest of the distance.
Behind the two leaders Trent and Cave swapped the third spot with Jon Watson running a consistent fifth.
With ten laps remaining the leaders came up on a three car battle for sixth between Woodring, Heck and Brian Morrow.
Dossey was able to work around the lapped cars and although Marcum closed the gap was never able to challenge for the win.
Trent finished third followed by Cave and Watson.
Jeff Williams started his quest for the Marcum’s Welding Pro Compact Division with the win on opening night.
Helped by an inversion of nine, Ryan Claborn and Terry Neal started on the front row with Neal grabbing the lead at the wave of the green flag.
Claborn running second got loose exiting turn two and dropped out of the top five with Williams and Nick Warner moving up into the top three.
Neal got pushed to the outside line on the 12th lap in turn two and lost the top spot to Williams with Terry Eaton Jr. and Kevin Harmon in close contact.Disaster struck Harmon, the fast qualifier, a lap later when he made contact with Tim Yarberry in turn four in an incident involving Neal. Only Neal was able to continue.
Williams beat Warner to the checkers by three-tenths of a second followed by Eaton, Claborn and Brandon Lee Cook.
Angie Goodin made a gutsy move by going inside two slower Indy FastKarts in turn three to score her first career feature win.
Goodin swamped the lead with Jason Reynolds several times within the first ten laps when she opened a slight lead.
With ten laps remaining the two leaders approached to smaller karts and Goodin made the decision to dive low through the corner. Reynolds lost lots of ground by having to take the high line through turn three.
RC Rigdon, the fast qualifier, claimed the third spot with an inside pass of Johnny Hargraves with two laps remaining and Hunter Goodin rounded out the top five.