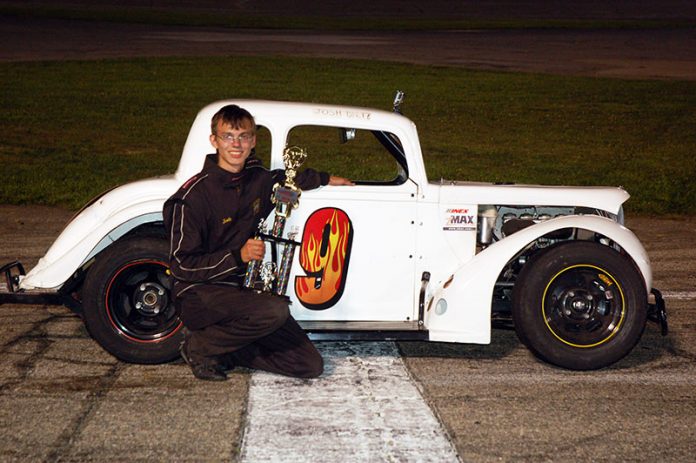 It had been almost five months since Josh Dietz drove into victory lane at Anderson Speedway, but that came to an end on Saturday.

With rain wiping out heat racing action the Legends Division drivers would do battle for 30 laps on Anderson Sesquicentennial Night presented by the Madison County Visitor’s Bureau.

Mike Carroll grabbed the early lead from the pole positon with Gerad Miller and Zack Miller close behind.

Zack Miller, the winner of the Grant Fritz/Greg Dietzen Memorial race, went to the outside to get around Gerad Miller on the second circuit entering turn three.

On the Interstate Auto Auction restart Zack Miller and Dietz both passed Mike Carroll and for the next 10 laps treated the fans to some close racing. Dietz several times got a run on Miller down the back straight, but couldn’t make the pass in turn three.

Finally on lap 16 Dietz was able to get a run on the front straight to take the point with Miller right on his heels. He had to survive a final restart to record his second win of the year.

Griffin Brown passed Gerad Miller on the final restart with three laps remaining to come home in third with Jacob Carroll rounding out the top five.