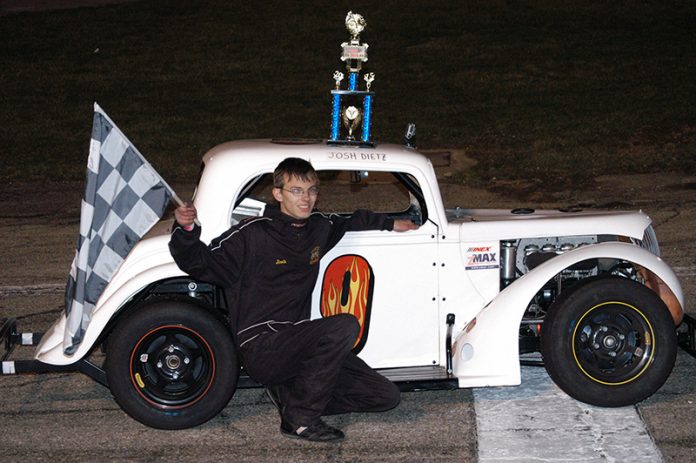 With an inversion of six for the feature line-up, defending track champion John Robbins grabbed the lead when the International Auto Auction waved for the 25-lap feature.

Dietz, the 2014 Kentucky State Champion, dropped in behind Robbins at the start from the fifth starting position chased by Cody Anderson, Webb and Gerald Miller.

On lap seven Dietz got a run on Robbins and he went into the lead with an inside pass entering turn three. Two laps later Webb made a similar move on Robbins and the battle for the lead began to heat up.

Lap after lap Dietz maintained his racing line around the high-banked quarter-mile oval with Webb running in his tire tracks.

Behind the two leaders Robbins lost two positions to Anderson and Zack Miller on lap ten as the trio exited turn four.

At the finish it was Dietz winning by less than two-tenths of a second over Webb with Anderson holding off Miller to grab third and Robbins rounding out the top five.

“This was awesome,” Dietz said following the win. “It’s fun to race against these guys. Everyone always races me clean.”

Webb in the Admiral’s Anchor sponsored Legend passed Dietz on the eighth lap of the first heat after the two traded paint entering turn one.

Webb was able to continue in the low line to take the lead while Dietz pushed high in the corner which allowed Anderson to grab the second spot.

Dietz had led from the start but Webb was on the move passing Anderson and Robbins on his way to the front.

Adam Sturgill took the lead at the start of the second heat race recording the win by less than a second over Eric Black. Mark Dietzen, Mike Carroll and Doug Dugger rounded out the top five.