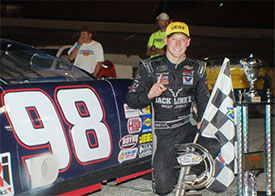 Daniel Hemric took advantage on a restart with 23 laps remaining to capture the Stoops Freightliner Red Bud 300 on Saturday, June 14 at Anderson Speedway.Hemric was able to use the inside line to take the lead from Pollard who had led from the halfway break at lap 150.Once Hemric took the lead he was able to pull away from Pollard for the victory. The crucial decision was made at the break with Hemric opting to take four tires while Pollard decided to take only two.Hemric, who set fast time during qualifications, had to survive a final restart with five laps remaining which gave Pollard a final shot at the win.The North Carolina driver was able to hold position to win the 48th running of the Red Bud 300 despite a four-car battle for the lead. Travis Braden passed Pollard on the final lap with Steve Dorer finishing fourth and Brandon Oakley rounding out the top five.Middletown’s Scott Neal, who didn’t take the initial green flag, got back into action following quick work by the crew and battled back to finish sixth. Yorktown’s Rick Turner finished ninth.Pollard opened a lead after the restart but Daniel Hemric closed and caught him by lap 260 with cars battling in front of the two leaders to stay on the lead lap. Pollard and Hemric ran side by side for 10 laps before the ninth caution flag waved for a spin by Ali Kern.The race was red-flagged on lap 188 when Trent Snyder and Brett Robinson got together down the back straight and collected the cars of Ross Kenseth and defending champion Johnny VanDoorn in a five car pile-up in turn three. None of the drivers were injured in the incident.That changed the complexion of the race for the final 112 laps with only Kenseth able to continue.Following the halfway break Yorktown’s Rick Turner took the pole position when the team elected not to change any tires followed by Bubba Pollard, Snyder, Kenseth and Brandon Oakley, who each changed two tires.VanDoorn restarted seventh after taking three tires. He then got caught on the outside and tangled with Steve Dorer, bringing out the caution flag on lap 159 and both drivers being relegated to the tail.Turner quickly dropped back through field before spinning on lap 181 and then pitting for tires.VanDoorn led 140 of the first 150 laps only surrendering the lead to Pollard on a restart on lap 54. After that VanDoorn opted to restart on the outside of the front row.Pollard ran in the top two positions for the first half of the race with Brett Robinson climbing from the eighth spot to run third.The drivers on the move were Snyder who started 17th and was running fourth at the break followed by Steve Dorer, who started 13th. Snyder was running a car with a crate motor and was down on horsepower to the super late models.Before a lap was completed two of the considered favorites were knocked out of the race in a turn one incident.Brian Campbell, starting on the outside of the front row, banged doors with pole sitter Landon Cling entering turn one. The contact caused Campbell’s Ford to shoot up the track and made contact with the outside retaining wall, collecting the Mitch Smith Auto Service sponsored Chevrolet of T.J. Reaid.Racing action returns to Anderson Speedway on Saturday, June 21 with the CRA Street Stock 200 taking place. Other divisions in action include NASH FM ThunderCars, Front Wheel Drives Oval and Thunder Roadsters.